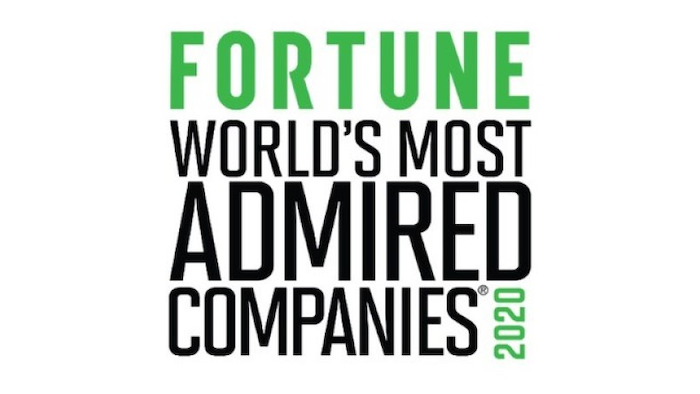 Fortune on Tuesday released its annual ‘World’s Most Admired Companies’ List, a ranking of the companies admired most by the business world. The corporate reputation lists is based on a survey of almost 3,800 executives, directors and analysts who rated 680 companies across 52 industries based on nine criteria, ranging from investment value and quality of management and products to social responsibility and ability to attract talent. Of those 680 companies, a total of 331 ended up being ranked. See Fortune’s full methodology here.

Three industrial distributors made Fortune’s cut, while the parent company of another also was included.

Grainger — No. 1 on Industrial Distribution’s 2019 Big 50 List — ranked first in the diversified wholesalers industry with a score of 7.21. It was the seventh-straight year that the MRO products distribution giant has topped the industry’s rankings. Fortune’s breakdown of Grainger’s attribute rankings was as follows:

Fastenal (No. 5 on Big 50) wasn’t far behind Grainger, placing third in the industry with a score of 6.80. Fastenal also placed third last year.

Electrical/industrial distributor WESCO International — which recently achieved a landmark $4.5 billion acquisition deal with electrical distributor Anixter International — tied for fifth in diversified wholesalers with a score of 5.67 after placing fourth in 2019. Genuine Parts Co. — parent company of Motion Industries (No. 4 on Big 50) — also for fifth. Genuine Parts moved up from seventh in 2019.

Several electrical distributors also made Fortune’s “World’s Most Admired Companies” list. Arrow Electronics led the electronics and office equipment industry rankings with a score of 7.22, ahead of Tech Data (2, 7.00), Synnex (3, 6.39) and ScanSource (4, 6.33). Graybar Electric placed second among diversified wholesalers with a score of 6.83.

Apple topped the overall list for a 13th-straight year at a score of 8.19. Amazon, Microsoft, Walt Disney and Berkshire Hathaway rounded out the top five.

Martin Inc. Names a Best Company to Work for in Alabama

The survey and awards program was designed to identify, recognize and honor the best employers in Alabama, benefiting the economy, workforce and businesses.
Aug 4th, 2021

The number of Grainger employees who said it was a great place to work was 29 percentage points higher than the average US company.
Jul 14th, 2021

Seventeen distributors, including five on ID's 2020 Big 50 List, contributed with donations of PPE supplies.
Jun 24th, 2021
Follow Us
Most Recent