Following the sudden passing of founder & owner Keith Mantis, his son takes over leadership of the Las Vegas-based company.

Fasteners Inc./Southwestern Supply said the eventual succession plan for Mike Mantis' had been planned for many years under Keith's guidance. Mike — who also takes leadership of Internet retailer ToolUp.com and Professional Contractors Supply — has worked in all areas of the company, including roles as janitor, stocker/order puller, shipping and receiving, inside sales, purchasing, accounts receivable and accounts payable and general accounting.

Mike Mantis was named executive vice president in 2006 and promoted to president and COO in 2018, where he was responsible for overseeing day-to-day operations of the company, web development, financial planning, vendor relationships and marketing strategy.  Mike’s recent promotion to president & CEO will add oversight of corporate vision, financial and sales strategy to his purview.

Fasteners Inc./Southwestern Supply was established in 1987 in San Diego. It has other California locations in Hayward and San Francisco. 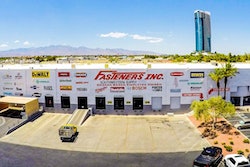