The waterworks products distributor was part of HD Supply until it was sold off in 2017.

Core & Main, one of North America's top distributors of waterworks products, plans to become a publicly-traded company, as the firm shared May 21 that it has filed a registration statement on Form S-1 with the U.S. Securities and Exchange Commission relating to the proposed initial public offering of shares of its Class A common stock.

St. Louis-based Core & Main formerly comprised the Waterworks segment of HD Supply until it was sold off in 2017 to private investment firm Clayton, Dubilier & Rice for $2.5 billion. CD&R then rebranded the company as Core & Main, and the distributor has been on an acquisition tear ever since.

Serving municipalities, private water companies and professional contractors across municipal and residential end markets, Core & Main's products and services are used in the maintenance, repair, replacement and construction of water and fire protection infrastructure. The company's S-1 form said it has a network of approximately 285 branch locations in 47 states and approximately 170 metropolitan areas across the US, serving a base of over 4,500 suppliers and total customer base of 60,000 customers.

"Since 2017, we have seized various opportunities to better realize our growth potential and have delivered attractive returns on net tangible assets (as defined below). For example, we have accelerated our fusible pipe and smart metering initiatives, opened eight new greenfield locations, improved our strategic planning capabilities and built out a dedicated mergers and acquisitions team," Core & Main said in the S-1 form. "In the last 15 quarters, we have successfully integrated 12 acquisitions, including two of the largest acquisitions in our company’s history: Long Island Pipe Supply Inc. in July 2019 and R&B Co. in March 2020." 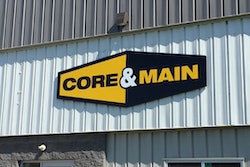