The group honored officials from BDI and Garlock Sealing Technologies.

The Power Transmission Distributors Association Foundation on Friday announced the winners of its awards for woman of the year and young industry leader.

Shawn Marken, the manager of the priority accounts data support team at BDI, received the Wendy B. McDonald Woman of the Year Award in recognition of her more than 40-year career as a personnel supervisor, insurance administrator, database editor and numerous other roles in management and leadership positions. She began her career at Bearing Service Co., the group noted, at a time “when women were not given many opportunities for advancement.”

“Shawn has built a foundation of excellence in data management and process automation that has been taught to many others within our company,” BDI vice president Bill Shepard said in the announcement. “She is one of the primary resources that has enabled BDI to grow the priority accounts business over the past 15 to 20 years.”

The group said Hameer “leads with integrity, excitement and sincerity.” 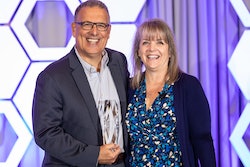