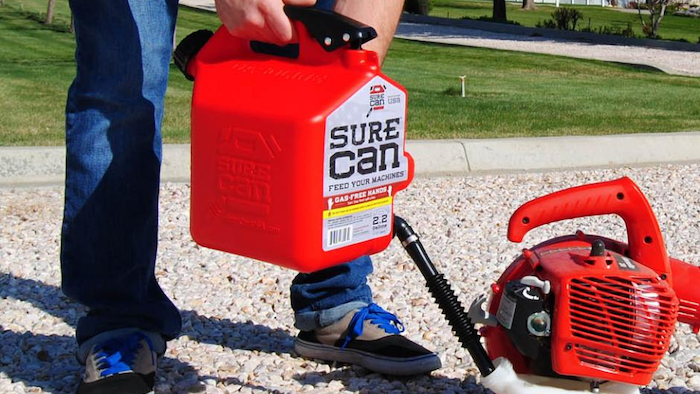 Have you ever used a gas can to fuel up a lawn mower or other motor equipment and ended up spilling gas? For those in Industrial Distribution's audience, the chance is pretty high. Even for the average joe, spilling gas while trying to fill up a motor is a nuisance.

SureCanUSA president Brad Ouderkirk sought out to solve that problem, and it turns out his simple solution isn't just a home run with those mowing their lawns, but with very successful business entrepreneurs as well.

At the 39th annual Specialty Tools and Fasteners Distributors Association (STAFDA) convention and trade show in Phoenix on Nov. 9, Ouderkirk's innovative new gas can was on display to be anonymously reviewed by Keynote Speakers Lori Greiner, Daymond John, and Kevin O'Leary from ABC's popular show, Shark Tank. The SureCan was reviewed on stage in the North Ballroom of the Phoenix Convention Center, along with four other products that had all company logos removed. All five products were submitted by manufacturers who had display booths during the conventions trade show Nov. 9-10.

Greiner is a reknown inventor and investor of retail products, and has been called "the Queen of QVC." John is best-known as the founder and CEO of clothing line FUBU, while Softkey founder O'Leary is hailed as the Donald Trump of Canada.

While three of the five products received mixed reviews – partially because the Sharks simply didn't fully understand their purpose – they all loved the SureCan. The product has a patented flexible rotating nozzle that enables the user to point it straight down from the can, thus greatly reducing the chance of gas spillage compared to the standard method of tipping the can. The nozzle was a huge hit with the Sharks, as all three saw the immediate benefit from its simple solution.

"It's brilliant," said Greiner, a reknown inventor and investor of retail products, while on stage. "I could see that replacing all other gas cans. I could see that in all Home Depots."

"Great products have very simple solutions, and the gas tank says it all. I get it right away," O'Leary commented. "I would buy that. It's easy to see its benefit in 2 seconds."

"It cures a pain you didn't know you had," added Green, who played to the crowd by mockingly trying to keep the gas can for himself.

Once the features of the gas can were shown – including a thumb-release flow trigger – it drew an ovation from the crowd of industrial suppliers and distributors.

Asked to rank the five products, all three Sharks were quick to put the SureCan at No. 1.

With the rave reviews, SureCan's booth during was consistently buzzing with traffic during both days of the trade show.

"So far it’s been an incredible response," said Ouderkirk at the booth on Nov. 10 when I asked him about the experience. "The booth has been like this all day. I haven’t been able to sit down yet."

SureCan is still new to the market, as Ouderkirk began selling it in June, and he says he sold 12,000 cans as of the trade show. Given the response at STAFDA, that figure is sure to escalate.

"I think this will help us a lot," he said about SureCan's success at the show. "I was a little nervous when they got to the end (of reviewing) and what was about to happen, but the reaction was more than we could ask for."

Ouderkirk said he was actually approached by a STAFDA member who was impressed by the product before the convention and helped become one of the five products that were reviewed.

Ouderkirk – a builder by trade who made the first SureCan prototype out of wood – had to put the product through 4 years of testing before it could hit the market.

"Now, we believe it's the best gas can hopefully in the world," he said.

More product information, including pricing, can be found at SureCan's website here.

See the SureCan in action in its promotional video:

SureCan is made in Lebanon, Tennessee, where the company recently invested $15.5 million in its manufacturing facility.

Though the SureCan was the Shark's favorite of the five products they reviewed, it wasn't the only one they liked.

Also on stage was the Hitch Mounted Truck Jib Crane, by Angola, Indiana-based Vestil Manufacturing. Made for owners/users of pick-up trucks, the hand-crank operated crane is mounted on the hitch of a truck to help users lift loads of up to 600 pounds. The crane lifts items from ground to truck bed height, and then rotates them into the desired cargo area. Installation and use requires no modifications to receiver or truck.

The three Sharks all ranked the crane at No. 2 out of the five products.

"I have a pick-up truck. I wish I had that," O'Leary said. "It looks cumbersome, but looks very useful."

Two days later at the trade show, I stopped by the Vestil booth to get their reaction to the positive reviews.

"It was great. To have it promoted and in front of that many people, with the impact they’ve had on so many other business, was great feedback," said Vestil director of sales Ryan Funkhouser. "It’s great for the company."

Funkhouser said that once the crane was chosen to be reviewed by the Sharks, the company was confident they and the STAFDA crowd would like it.

"We know there’s a large population, especially in our industry, that have trucks," Funkhouser said. "The mass appeal made us confident, but you never know what you’re going to get with what three entrepreneurs are going to say about it. There’s that nervous factor."

Like with SureCan, having the crane on stage in front of everyone and getting positive feedback also helped Vestil at its trade show booth.

"We’ve had a lot of people stop by and say they voted for it and they thought it was awesome," Funkhouser said. "People have stopped by with their own feedback with how they’d improve it. It’s got a lot of people in the booth and gained us a lot of visibility."