Upon completion, the newly-combined company will be a multi-region electrical distributor with more than 1,300 employees from 41 locations in the Midwest, Southeast and South Central U.S. 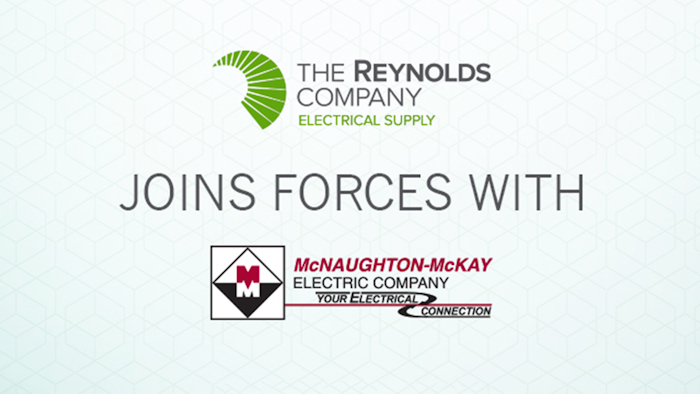 Upon completion, the newly-combined company will be a multi-region, top 10 electrical distributor with more than 1,300 employees serving customers from 41 locations in the Midwest, Southeast and South Central areas of the U.S. Each company will retain its leadership structure and existing name; the organizations will operate as two separate companies owned by McNaughton-McKay.

In business for more than 107 years, McNaughton-McKay is a 100-percent employee-owned electrical distributor focused on automotive, industrial and construction markets. While the company began in Michigan, it has grown over the years to service customers in Ohio, North Carolina, South Carolina and Georgia. In addition, McNaughton-McKay owns and operates a wholly owned subsidiary, S&D GmbH, selling electrical products and solutions in Germany.

“I have long admired The Reynolds Company’s pursuit of excellence and commitment to its customers’ success,” said Don Slominski, Jr., president and CEO of McNaughton-McKay. “Through the years I have watched Walt Reynolds and Donald Reynolds — and their father, Don, before them — lead in a way that mirrors our company’s own commitment and dedication to the people we work with and the people we serve. It is with much excitement that we welcome The Reynolds Company into our employee-owned family, knowing that together we can do even more to serve our customers.”

The Reynolds Company, founded by Don Reynolds Sr., has operated in Texas since its founding in 1984. Primarily focused on support of the industrial end user, industrial OEM, and commercial construction markets, the company currently has more than 450 employees and 18 locations in Texas and Louisiana.

“Our organization has known and collaborated with McNaughton-McKay for many years,” said Walt Reynolds, president and CEO of The Reynolds Company. “In many ways, our approach to business and customer service is already similar — as is our unwavering support of our employees. Our management team looks forward to working with McNaughton-McKay, and each new colleague, to service our industry faster and better. The future is bright for all of us.”

The transaction between McNaughton-McKay and The Reynolds Company is expected to be completed before the end of 2017.

After making two West Coast acquisitions earlier this year, Endries has added one in its home state of Wisconsin.
Oct 8th, 2020

It's Applied's fourth acquisition since the start of 2018 and builds upon its August 2019 bolt-on of Olympus Controls Corp.
Oct 7th, 2020

Snap-on gains a well-known provider of industrial vending, as AutoCrib has been one of the pioneers of the technology since 1995.
Sep 29th, 2020
Follow Us
Most Recent