A 2018 study of about 3,000 people in the US found that nearly 9 in 10 entrepreneurs with young companies expect to employ workers during the next five years. 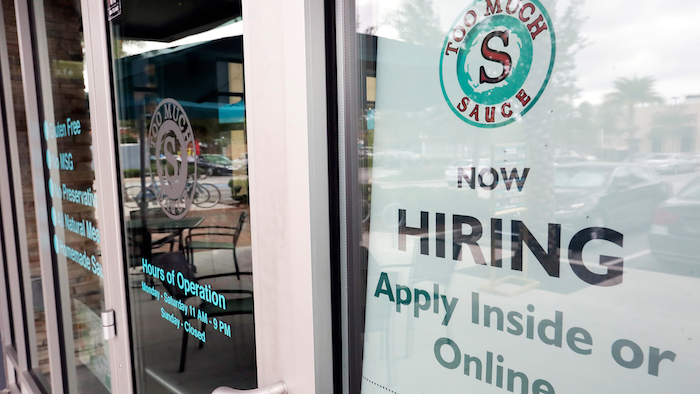 In this Nov. 4, 2019 file photo, a job posting is displayed near the entrance outside a restaurant in Orlando, FL.
AP Photo/John Raoux, File

NEW YORK (AP) — Although many small businesses struggle to find staffers to fill their open positions, many entrepreneurs with recently launched companies intend to create jobs within a few years.

That's one of the findings of a study by researchers at Babson College in Wellesley, Massachusetts. The study, based on surveys of approximately 3,000 people in the U.S. during 2018, found that 87% of entrepreneurs with young companies expect to employ workers during the next five years, and 38% expect to have six or more workers. Seventeen percent said they expected to have 20 or more workers in five years.

Those expectations reflect the confidence and optimism of owners of businesses that are in the early stages of growth, the study said. “They trust that they can recruit, hire, and develop employees to help them successfully grow their business," it said.

Entrepreneurs in the study were upbeat even as small businesses in general were struggling to find staffers. Hiring at small companies tracked by payroll processor ADP was erratic during 2018. Owners have struggled as the unemployment rate fell, a sign of a shrinking labor pool, and as they reported they couldn't find workers with the skills they needed. Job creation among small businesses has fallen sharply in 2019, but the Babson survey was completed before the current year began.

The jobs entrepreneurs are contemplating may be most abundant in companies that provide finance, real estate and business services, as well as retail and wholesale businesses. Those industries combined account for more than half the new companies the Babson researchers studied.

The study, which examined a range of aspects of entrepreneurship, also looked at business ownership as a means to earn a living — in other words, how many people start companies because they couldn't find other work. Less than 9% of entrepreneurs surveyed said they started their companies out of the need to earn a living. The study found that 2.3% of entrepreneurs ages 45 to 54 started companies out of necessity — the highest amount of any age group in the survey. Possible reasons for that trend include possible age bias that limits opportunities for older workers and a lack of high-tech skills that also curtails their ability to find a job.

A trend moving away from business travel could spell big trouble for hotels, airlines, and convention centers.
Nov 12th, 2020
Follow Us
Most Recent