The Presidential Election is Tuesday, November 6, so her remarks on politics and the U.S. and global economies, will be quite timely. 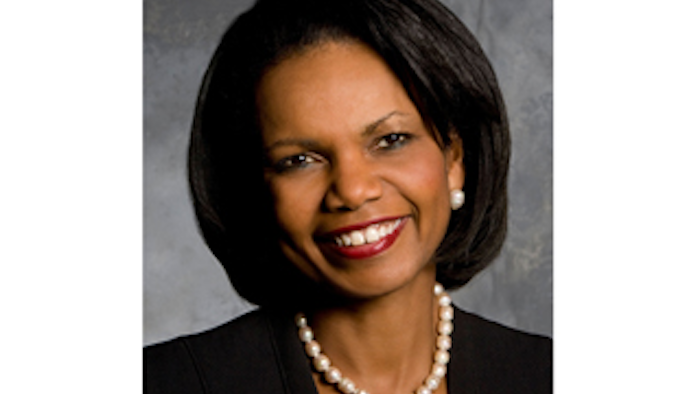 The Presidential Election is Tuesday, November 6, so her remarks on politics and the U.S. and global economies, will be quite timely.

In the mid-1980s, Ms. Rice served in Washington D.C. as an international affairs fellow attached to the Joint Chiefs of Staff. In 1989, she became director of Soviet and East European affairs with the National Security Council and special assistant to President George Bush during the dissolution of the Soviet Union and German reunification. In 1997, Ms. Rice served on the Federal Advisory Committee on Gender-Integrated Training in the Military and was appointed National Security Advisor by President George W. Bush in 2001. In 2004, Ms. Rice became the 66th Secretary of State following Colin Powell’s resignation. (Colin Powell was STAFDA’s 2005 keynote speaker.)

As Secretary of State from 2005-2009, she dedicated her department to “Transformational Diplomacy” with a mission of building and sustaining democratic, well-governed states around the world, particularly the Middle East. To that end, she relocated American diplomats to such hardship locations as Iraq, Afghanistan, and Angola, and required them to become fluent in two foreign languages. Ms. Rice also created a highlevel position to de-fragment U.S. foreign aid.

Currently, Ms. Rice is a professor of Political Economy in the Graduate School of Business and professor of Political Science at Stanford University, Palo Alto, CA. As professor of political science, she has been on the Stanford faculty since 1981 and has won two of its highest teaching honors. In 1993, Ms. Rice was the first woman, the youngest (age 39), and first African American to become a Stanford Provost. As Provost, she was responsible for a $1.5 billion annual budget and an academic program involving 1,400 faculty members and over 14,000 students.

Ms. Rice has authored and co-authored numerous books including "No Higher Honor: A Memoir of my Years in Washington" (2011) and her bestseller, "Extraordinary, Ordinary People: A Memoir of a Family" (2010) which pays tribute to her parents.

The 57-year old was born in Birmingham, AL, an only child fiercely doted on by her parents – a Presbyterian minister and teacher – who insisted she had to be “twice as good” as her peers. Despite being surrounded by racism in the segregated South, Ms. Rice excelled and earned her bachelors degree in political science from the University of Denver, her masters from Notre Dame, and doctorate, also from the University of Denver.

Registration materials for STAFDA’s Orlando Convention & Trade Show will mail to members on Friday, June 29, with online registration from the members-only section of its website beginning Monday, July 2, at 8 a.m. Central.

William Ward has been Evergreen's EVP since September 2020 as a part of the succession plan of longtime CEO Kevin Higginbotham.
Aug 17th, 2021

STAFDA reassures attendees and exhibitors that the event is very much "on", and gave updates on safety measures put in place.
Aug 16th, 2021

Net distributions to AD distributor members were even higher.
Aug 2nd, 2021
Follow Us
Most Recent