State and local governments have been more than happy to play up the amenities they think make their locations the best choice for Amazon's second headquarters. But many of them will not disclose the tax breaks or other financial incentives they are offering the online giant. 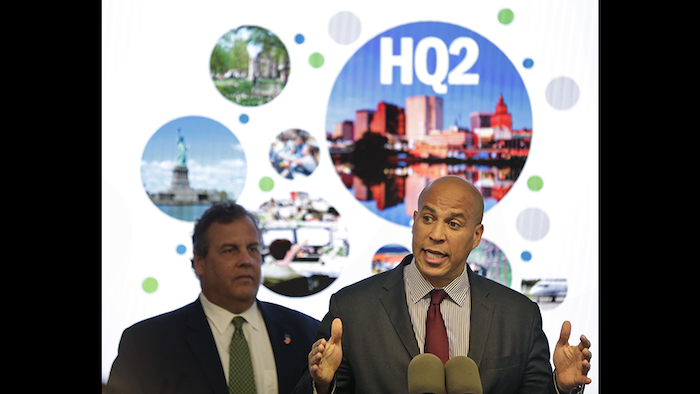 PHILADELPHIA (AP) — State and local governments have been more than happy to play up the amenities they think make their locations the best choice for Amazon's second headquarters. But many of them will not disclose the tax breaks or other financial incentives they are offering the online giant.

More than 15 states and cities, including Chicago, Cleveland and Las Vegas, refused requests from The Associated Press to detail the promises they made to try to lure the company.

Among the reasons given: Such information is a "trade secret" and disclosing it would put them at a competitive disadvantage.

"We want to be in the best possible position to negotiate. We don't want the whole world to know our strategy," Democratic Gov. Gina Raimondo of Rhode Island said in a radio interview.

Amazon's search for a second headquarters city has triggered an unprecedented competition among governments around North America to attract a $5 billion project that promises to create 50,000 jobs. The retailing behemoth has made clear that tax breaks and grants will be a big factor in its decision. It received 238 proposals and said it will announce a decision sometime this year.

Public records laws around the country vary, but when courting businesses, governments generally aren't required to disclose tax breaks and other incentives during the negotiating phase.

Open-government advocates, though, argue that Amazon is a special case because of the way it has turned the project into a public auction, the large amount of taxpayer money at stake, and the political clout the Seattle-based company could have in its new home.

"They're just acting like this is another secret deal," said Greg LeRoy, head of Good Jobs First, a nonprofit group that tracks economic development spending. "This is a nutty situation."

He said there are no grounds for hiding the information since no one is negotiating yet with Amazon.

"It's all paid for by taxpayer dollars," he said. "Therefore, it should all be public."

In recent months, Amazon suitors in Maine have cited New England's charm, skiing and beaches, Detroit has cited its rebounding downtown, and others have boasted of their labor forces or public transportation. Chicago recruited "Star Trek" actor William Shatner to help narrate a video pitch in hopes of getting the attention of Amazon CEO Jeff Bezos, a devoted Trekkie.

The AP asked for copies of the financial proposals from dozens of places trying to draw Amazon. The AP also sought invoices outlining how much public money was used to create the proposals and promote them via public relations campaigns.

Some state and local governments have trumpeted the financial incentives they are dangling. New Jersey's pitch contains $7 billion in tax breaks, a draft of Houston's plan calls for about $268 million in inducements, and Boston's incentives include $75 million for housing for Amazon employees.

But others — including Delaware, Georgia, Kansas, Nevada, Virginia and such cities as Detroit; Philadelphia; Orlando, Florida; Louisville, Kentucky; and Albuquerque, New Mexico — won't say exactly what they're offering.

Chicago said releasing such information "could give an advantage to another applicant," and it turned over to the AP 82 pages of nondisclosure agreements. Charlotte, North Carolina, gave a similar explanation.

An Amazon spokesman declined to comment. Amazon said in its request for proposals in September that "certain aspects" of the project and details about the company "are confidential, proprietary and constitute trade secrets."

Many of the bids received by Amazon were submitted by outside groups such as regional economic development agencies that are not typically required by public records laws to release such information.

More than 40 other requests from the AP for financial information produced no responses from government agencies or are still under consideration.

In Texas, for example, cities including Dallas, Houston and Austin responded to the AP's request by asking the state attorney general for an opinion on whether some of the financial details can be withheld for competitive reasons.

Kelley Shannon, executive director of the nonprofit Freedom of Information Foundation of Texas, lamented: "The people of our state can't really follow the money anymore. ... Taxpayers have a right to see how their money is being spent."

John Marion, executive director of the good-government group Common Cause Rhode Island, said it was disappointing that "Rhode Island didn't shoot for transparency."

"We don't necessarily want a company that can throw its weight around. So it would be interesting to know how that message was represented in the bid," he said.

According to records obtained by the AP, the costs associated with the proposals themselves ranged from a few hundred dollars for copies, to tens of thousands of dollars for promotional efforts.

In Philadelphia, an independent development agency overseeing the city's bid said it spent $160,000 to develop and promote its proposal, including a website and video. Worcester, Massachusetts, released invoices showing that it spent more than $10,500 on its proposal, most of it on a video. Virginia Beach, Virginia, spent $3,000 to build a sand sculpture to promote its application.