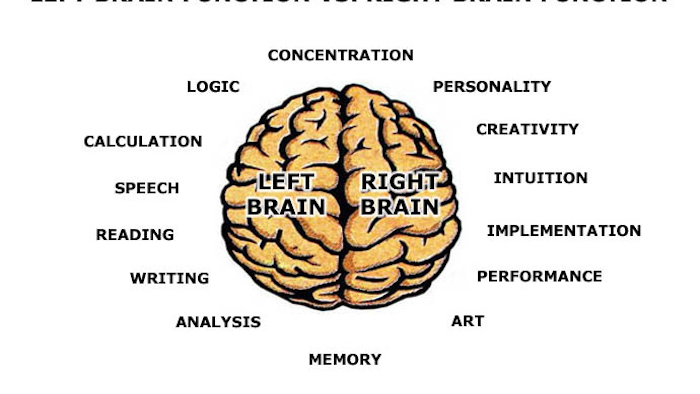 In the early 1960s, psychobioligist Roger W. Sperry discovered that the left and right hemispheres of the brain do not process the same information. Using a series of experiments with stroke victims, Sperry proved that “the left side examines details and processes them logically and analytically, but lacks a sense of overriding, abstract connections. The right side is more imaginative and intuitive, and tends to work holistically, integrating pieces of an informational puzzle into a whole.” [1] This led to the general acceptance that the left brain is analytical and the right brain is the seat of creativity.

For many decades we have been in an information age dominated by engineers, computer programmers, and other left brain thinkers. In Daniel Pink’s book, A Whole New Mind, he asserts how we are transitioning from the information age to the conceptual age; and from L-directed thinking to R-directed thinking. Pink defines L-directed (left brain) thinking in terms of logic, sequence, literalness, and analysis; and R-directed (right brain) thinking in terms of synthesis, emotional expression, context, creativity, and the big picture.

This transition to the conceptual age and R-directed thinking is based on the fact of how we are slowly losing many L-directed jobs to foreign workers. Any work that can be reduced to rules; such as, programming, building computers, reading x-rays and basic engineering are in danger, because technical workers in foreign countries can do the same work at 1/5 of the cost.

“American workers need to do what workers abroad cannot do equally well for much less money – using R-directed abilities such as forging relationships rather than executing transactions; tackling novel challenges instead of solving routine problems; and synthesizing the big picture rather than analyzing a single component,” says Pink

A second factor that is affecting the move to a conceptual age is the relentless use of automation in American factories, which eliminates basic low-skilled manufacturing jobs. But at the same time, automation demands service, maintenance, repair, and troubleshooting that require people who are masters of many aptitudes and skills.

These people will rely more on creativity than competence, more on tacit knowledge than technical manuals, and more on seeing the bigger picture and relying on intuition. Although some of the aptitudes Pink says are needed seem a little ethereal – like spirituality, telling stories, and play – he does make some good points on why right-brain thinking is needed to compete.

“What’s in greatest demand today is not just analysis but synthesis – seeing the big picture and crossing boundaries; being able to combine disparate pieces into an arresting new whole,” says Pink [2]. I refer to this as the ability to see patterns in things that would lead to a holistic view.

I see the wisdom of this claim in terms of manufacturing, because I think that growing American manufacturing in the U.S. is about innovation, new products, new customers, and market opportunities, which are better understood by right brain methods.

It is also very useful in marketing, where data is gathered from the field on customers and prospects, to help see the trends that will determine which market to target.

The best strategic and marketing thinkers I have met in my career have the ability to gather all kinds of disparate data, and then use their intuition to see the patterns that help them make projections of where they should go in the future.  On the other hand, I have tried (many times) to teach synthesis to people dominated by left brained thinking and found that most concepts simply do not register.

Pink suggests that the difference between function and design is bringing together disparate things into a solution that is very unique. He proclaims that in a global world where Asian competitors can use the same technology to make the same product at lower prices, then the only way to compete is by unique design.

Designing new complex products will still require a lot of engineering, programming, and other technical people, but designing a product that will sell enough units to justify the costs may require design and thinking about intangible issues; such as being able to understand customer needs and wants, anticipating market trends and requirements, and being able to see patterns.

Essentially, he is suggesting that design requires holistic thinking, which includes information beyond the basic product concept.

To me, a unique design needs to take into consideration external factors that left-brained people often miss or ignore. An ideal new product would include features and advantages that are not easily copied by foreign competitors such as offering special services with the product.

I have seen many examples of manufacturers who think they have created a unique design only to find out later that the product does not really have a competitive advantage. Maybe the answer for engineering designs is to create teams that include both right and left brained thinkers as part of the early design concepts.

Pink also says that leaders in the new century must have empathy. He states that “the era of sharp-minded knowledge workers and briskly efficient high-tech companies that prized emotional distance and cool reason, and who could make a decision unimpeded by emotion” [2] may not be the answer.

American manufacturing is facing a situation where we don’t have the skilled workers we need and the baby boomers are retiring. To recruit and retain the bright, brave, and honest future manufacturing workers may take a different approach that requires the ability to understand the emotional makeup of other people. Pink implies that emotional abilities will become more important than intellectual abilities. Empathy is also an absolutely necessary part of interviewing, which every leader must do every day. It is important for building teams and it motivating employees.

Teams are always composed of people who have different agendas, emotions, needs, and views, but they still have to work together and make consensual decisions. It is essential that the leader understand the emotional make-up of these people and make sure they achieve team goals.

Empathy is also necessary to retain the talented people I call “hunters.” Hunters are the people who get things done, are creative, and are a source of new ideas. Retaining hunters must be a high priority of the leader, because it costs too much to replace them. It takes skills in coaching, mentoring, and empathy to be able to retain hunters and get them to follow you. It is this ability to understand the people that work for them, or even customers that buy from them, that may give them the inside track of becoming the complete manager/leader.

Pink refers to Viktor Frankl’s book Man’s Search for Meaning and points out how meaning is very important to motivate workers to be more creative in the new century. It is based on the assertion that the motivational engine that powers mankind is the pursuit of meaning. He claims that the pursuit of meaning is what powers human existence. This assertion gets very philosophical in terms of how it is applied, but it may have application for a big problem faced by American manufacturing: How to attract and recruit young people into a manufacturing career.

I don’t think that it will be possible to attract the bright and educated young people that are needed in manufacturing without making the job (career) more meaningful. The question is: How do you make people’s jobs more meaningful and bring them more job satisfaction?

This pursuit is probably different for every person, but for me the search was always about doing things that were interesting. The more new ideas I could find or invent in work, the happier I was. Fortunately I have a very eclectic list of interests, and my personal mission was to find ways to combine my interests and skills with my work to bring real meaning and enjoyment to my career. I always wanted to do something new and was willing to take chances right from the beginning.

Making a job more meaningful is extremely important, and one idea that I think would promote meaning and job satisfaction is assisting young employees in planning out their careers.

Instead of just hiring them for some specific job profile, companies should identify their interests and help them map out a complete career. They should also show them the education and training needed, and how they can reach their monetary and promotion goals. This is being discussed more and more as manufacturing tries to come to grips with its bad image and the problem of training and retaining the high-skilled workers of the new century.

In an article he wrote on “How Do We Revive America?”, Thomas Friedman says, “If we can make America the best place to dream something, design something, start something, collaborate with others on something – in an age where every link in the chain can now be done in so many places – our workers and innovators will do just fine.”

But I would add that to accomplish these lofty goals will require shifting to right-brained strategies and leaders who can think with both left and right brain quadrants. In fact, I will go out on a limb and predict that the manufacturing workers and companies that emphasize R-directed thinking will have a better chance of getting ahead in the new economy.

Mike Collins is the author of "Saving American Manufacturing" and its companion book, the "Growth Planning Handbook for Manufacturers." To learn more about the author or these titles, visit http://www.mpcmgt.com/.