The company will pay $500,000 and be monitored by state officials to ensure it properly notifies its workers about new cases. 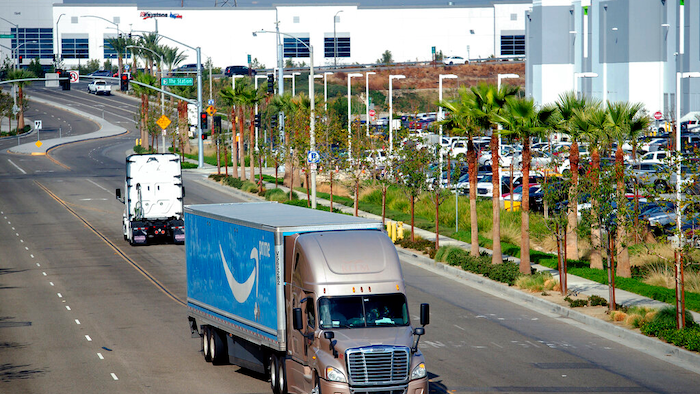 A semi-truck turns into an Amazon Fulfillment center in Eastvale, CA on Nov. 12, 2020.
Watchara Phomicinda/The Orange County Register via AP)

SACRAMENTO, Calif. (AP) — Amazon has agreed to pay $500,000 and be monitored by California officials to ensure it properly notifies its workers about new coronavirus cases, the state's attorney general said Monday.

Amazon employs about 150,000 people in California, most of them at 100 “fulfillment centers” — sprawling warehouses where orders are packed and shipped. The agreement, which must be approved by a judge, requires the Seattle-based retailer to notify its workers within a day of new coronavirus cases in their workplaces.

Amazon also agreed to notify local health agencies of new virus cases within 48 hours and will stop issuing notices that Attorney General Rob Bonta said do not adequately tell employees about Amazon's safety and disinfection plan and workers' rights related to the pandemic.

“As the company enjoyed booming and historic sales with its stock price doubling, Amazon failed to adequately notify warehouse workers and local health agencies of COVID-19 case numbers, often leaving them unable to effectively track the spread of the virus,” Bonta told reporters in San Francisco at an event held across the street from an Amazon warehouse.

Bonta added: “This left many workers understandably terrified and powerless to make informed decisions to protect themselves and to protect their loved ones," like getting tested for the virus, staying home or quarantining if they’ve been notified of a potential workplace exposure.

Amazon spokesperson Barbara Agrait said in a statement that the company was “glad to have this resolved and to see that the AG found no substantive issues with the safety measures in our buildings.”

Former California Attorney General Xavier Becerra, who now heads the U.S. Health and Human Services Department, last December asked a judge to order Amazon to comply with subpoenas his office issued nearly four months earlier as part of its investigation into how the company was protecting workers from the coronavirus at its facilities.

The state attorney general’s office first disclosed the investigation in a filing in July 2020 in a San Francisco Superior Court case in which an employee accused the company of not doing enough to safeguard staff.

It's not known how many Amazon employees have been exposed to the virus at work during the course of the pandemic. In October 2020, the company disclosed that nearly 20,000 of its front-line U.S. workers had tested positive or were presumed infected.

The judgment, which applies only in California, requires the company to allow monitoring of its virus notifications by the attorney general’s office for a year and to pay the half-million-dollar settlement that will go to enforce the state’s consumer protection laws.

Bonta said the judgment is the first of its kind in the U.S. and complies with a state “right-to-know” law that took effect last year. The stipulation was signed on Friday and both the complaint and stipulation were filed with the Sacramento County Superior Court on Monday.

Gómez Reyes said her bill was enacted after lawmakers heard stories of workers who were not told that they might have been exposed. Many California companies have since complied, she said, but some “found loopholes and they either failed or chose not to comply with the law.”

The agreement came as Amazon gears up for the holiday crush of package deliveries. Bonta said compliance is particularly important as the state prepares for another possible winter surge in cases as people gather indoors for the holidays.

California this year also became the first state to prohibit big retailers from firing warehouse workers for missing quotas that interfere with bathroom and rest breaks.

That law prohibits Amazon and similar companies from disciplining workers for following health and safety laws, and allows employees to sue to suspend unsafe quotas or reverse retaliation.