As Atlanta vies for Amazon's second headquarters, a developer just happens to be proposing a $5 billion downtown project with 9.3 million square feet of office space. No one's saying it's for Amazon — yet. 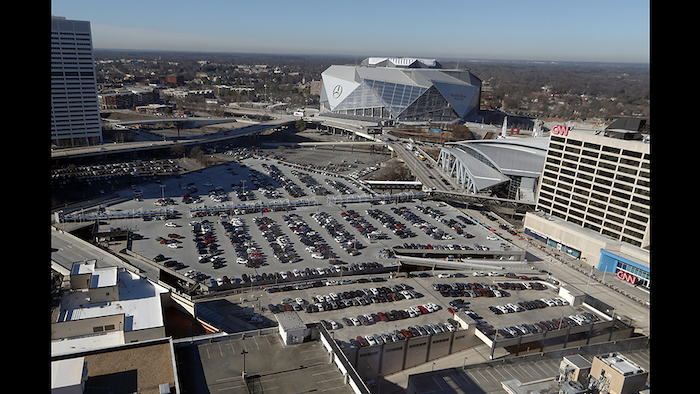 A tract of land known to locals as The Gulch is shown Thursday in Atlanta. As the city vies to entice Amazon to build its second headquarters on the site, local leaders are studying a proposal to build a $5 billion project. (AP photo)

No one's saying it's for Amazon — yet.

Details of the massive proposed development are coming into view from public records and comments.

Public documents filed by the group don't mention Amazon, but specifications of its proposed project are in line with the retail giant's requirements.

The office space that would be created "is almost exactly two Sears Towers," said Thomas Leslie, an architecture professor at Iowa State University who is the author of "Chicago Skyscrapers, 1871-1934."

"It would be like building two of them right next to each other," Leslie said of the 110-story Chicago high-rise, which has since been renamed Willis Tower.

The Atlanta development would include 18 buildings in a part of downtown known as "The Gulch," now covered with vast parking decks and vacant lots and sometimes used as a film set, according to planning documents from the Atlanta Regional Commission. Hollywood crews used it to film scenes from the 2016 movie "Captain America: Civil War." The AMC TV show "The Walking Dead" filmed from a rooftop overlooking The Gulch during the show's first season.

The office space would be spread throughout 14 of the buildings, which would range in height from 70 to 500 feet (21 to 152 meters), the planning documents state. It would also include a 350-foot (107-meter) hotel with 1,500 rooms and three residential towers.

An area known as the Gulch, made up of parking lots and railroad lines, is seen against the downtown skyline in Atlanta. (AP photo)

Metro Atlanta now has about 146 million square feet (13.6 million square meters) of office space, and the proposed project would be an increase of about 6.4 percent, said Barbara Denham, a senior economist at New York-based Reis Inc., which tracks commercial real estate.

It would take at least 60,000 jobs to fill all the office space being proposed, Denham said.

However, the metro area has been adding jobs at a rapid rate. Metro Atlanta had seen some of the highest rates of job growth in the U.S., adding 37,100 office jobs last year for a growth rate of nearly 5 percent, Denham said.

Asked whether the project would move forward with or without Amazon, Sciarrone said after Thursday's meeting, "we hope so."

At Thursday's meeting, Sciarrone noted the existence of two rail transit stations at each end of the development. He said the team working on the project has discussed access to the stations with representatives of the Metropolitan Atlanta Rapid Transit Authority, and that public transit would be a key component of the development.

"Something that big creates its own gravity," Leslie said. "It's something that's going to pull the cultural life in a city in its own direction."

The projected completion date is 2027, which is when Amazon has said it needs up to 8 million square feet (743,000 square meters) of office space in its second headquarters building known as HQ2 which could potentially bring 50,000 workers. Work could begin in about a year, Sciarrone said.

The timeline is "ambitious, but doable," said Richard Porter, a professor in the School of Building Construction at the Georgia Institute of Technology.

Details of the project and its timeline would be likely adjusted, depending on market conditions in the next few years and other factors, Porter said.

Most of the 20 finalists for the Amazon project are keeping details of their pitches secret, but Boston has gone public with a massive development proposal on the scale of the Atlanta project.