Many federal employees started the workweek Monday with confusion and anxiety over a government shutdown that will lock hundreds of thousands of them out of their jobs. 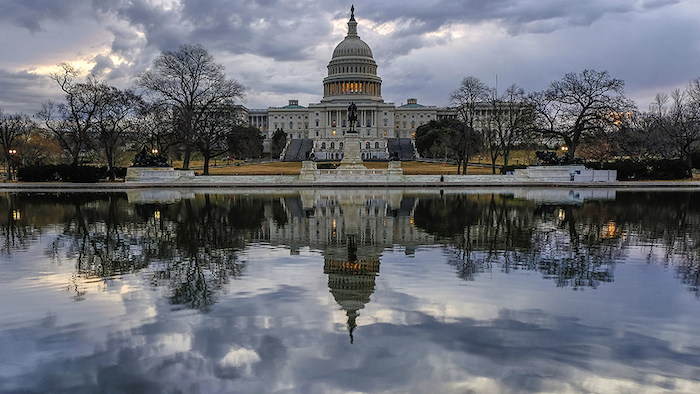 Clouds are reflected in the U.S. Capitol reflecting pool at daybreak in Washington as Day Three of the government shutdown continues on Monday. (AP Photo)

WASHINGTON (AP) — Many federal employees started the workweek Monday with confusion and anxiety over a government shutdown that will lock hundreds of thousands of them out of their jobs.

The partisan stalemate over the budget forced scores of federal government agencies and outposts to close their doors over the weekend. But many government functions — especially those involving national security — are considered essential and won't be affected.

The federal Office of Professional Management advised workers to refer to their home agency for guidance on reporting for duty.

Unions leaders said workers were struggling with the uncertainty that comes with not knowing when or if they will get paid.

J. David Cox, national president of the American Federation of Government Employees, which represents 700,000 federal and D.C. government workers, said Sunday he was fielding hundreds of emails every hour from worried employees.

"That level of concern is higher than it's ever been," Cox said. "If your take-home pay is averaging $500 a week, you're living payday to payday, and if all of a sudden that payday doesn't show up, you can't pay for childcare, you can't buy groceries. If you have to go and borrow money, that puts you deeper in debt," Cox said.

Cox said he has told his members to report to work Monday and await instructions from the agency they work for about whether they will be sent home or continue to work.

Witold Skwierczynski, who works as a claims representative for the Social Security Administration in Columbia, Maryland, and is president of the American Federation of Government Employees Council 220, said the workers he represents have been told they will continue to work, but won't be paid until there's a budget resolution. His members, largely workers who interact directly with the public in field offices or tele-service centers, are "pawns in this game," he said.

"The last furlough lasted 16 days, no one got paid on time and people who live paycheck to paycheck had a crisis. People couldn't pay their bills," he said.

Rusty Payne, a spokesman for the Drug Enforcement Administration, drove to work Monday in business casual attire, a rare concession to comfort based on a probability he would be furloughed. Upon arrival, he found that he was indeed furloughed and was sent home.

"I'm on the shelf," he told The Associated Press.

He and other DEA employees were told to report Monday, when they would learn their status.

While the furloughs create consternation for some federal workers, Payne, a 15-year veteran, is greeting the news with more of a shrug.

"At some point they'll cut a deal and it will all go back to normal," he said.

And he says there will be plenty of work to do around the house.

"When there's a furlough my wife refers me as her manny (male nanny)," Payne said.