United Parcel Service employees on Thursday visited a growing memorial at a San Francisco packing facility to pray and sign a poster honoring three longtime colleagues who were shot and killed a day earlier by a co-worker. 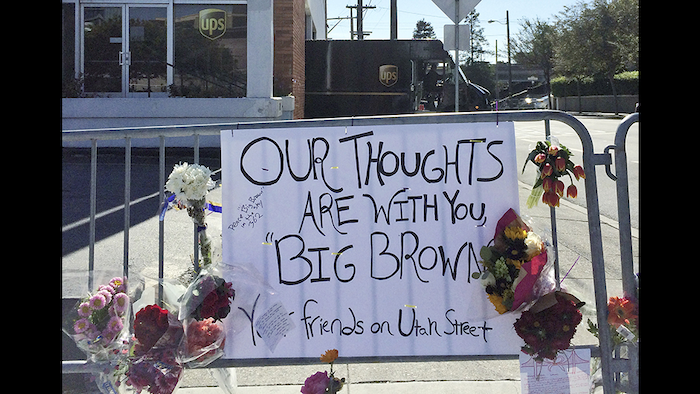 SAN FRANCISCO (AP) — United Parcel Service employees on Thursday visited a growing memorial at a San Francisco packing facility to pray and sign a poster honoring three longtime colleagues who were shot and killed a day earlier by a co-worker.

They described the atmosphere as downcast as they went back to work.

Isaiah Miggins, a UPS loader on the overnight shift, said it was hard to finish his shift.

"Everybody was down," Miggins said, adding that UPS is like the U.S. Post Office: "We gotta get those packages out."

UPS spokeswoman Susan Rosenberg said the company has marshaled additional drivers, loaders and management from other facilities to help with the backlog. Grief counselors were also at the facility.

San Francisco police had a priest on site Wednesday.

Investigators were trying to determine what prompted Jimmy Lam to open fire during a Wednesday meeting with co-workers.

Lam, 38, a UPS driver, filed a grievance in March claiming he was working excessive overtime. It seems he specifically went after the three drivers he killed before fatally shooting himself, said Joseph Cilia, an official with a Teamsters Union local that represents UPS workers in San Francisco.

Cilia said witnesses told him that Lam walked up to driver Benson Louie and shot him during the meeting. As his co-workers frantically fled the room, he shot Wayne Chan in the back and then walked up and "finished him," Cilia said, citing witnesses.

Victim Mike Lefiti was fleeing from the building when Lam went to a street and shot him, he said.

"It's senseless. I can't think of anything. Why him? Why them?" Cilia asked.

Police had few details on Lam. UPS CEO David Abney said the company was investigating the circumstances that led up to the shooting.

UPS workers gather outside a UPS package delivery warehouse where a shooting took place Wednesday in San Francisco. A UPS spokesman says four people were injured in the shooting at the facility and that the shooter was an employee. (AP Photo)

UPS workers gather outside after a reported shooting at a UPS warehouse and customer service center in San Francisco on Wednesday. (AP Photo/Eric Risberg)

Police returned control of the building to UPS on Wednesday night. It was cleaned, and deliveries resumed Thursday, Rosenberg said.

The makeshift memorials were created at two corners of the building with flowers and signs.

Two other UPS employees were wounded and later released from a hospital.

Amid the barrage of gunfire, some workers sought refuge on the roof of the four-story facility, while others ran outside and pounded on the windows of a public bus, witnesses said.

"They were screaming, 'Go! Go! Go!'" said Jessica Franklin, 30, who was riding to work when the bus made a regular stop in front of the UPS facility. "As they got on the bus, they were all ducking."

The shooting prompted a massive police response in one of the city's industrial neighborhoods, about 2 miles (3 kilometers) from downtown San Francisco.

Miggins said he saw Lefiti, known as "Big Mike," as he arrived for work just before 9 a.m., a few minutes before the shooting started. "He was a joyful man. Always happy," Miggins said.

A photo on Lefiti's Facebook page shows him in his brown UPS uniform holding a trophy. He also posted photos of his UPS truck and an award for 15 years of service to the company in 2015.