You've seen this year's Big 50 List in the print issue, digital edition and/or our countdown videos (or if you haven't, you really should). Here, see the list in a condensed, easy-reference version. See where your company and competitors rank, who moved up, who moved down and who joined the list this year. 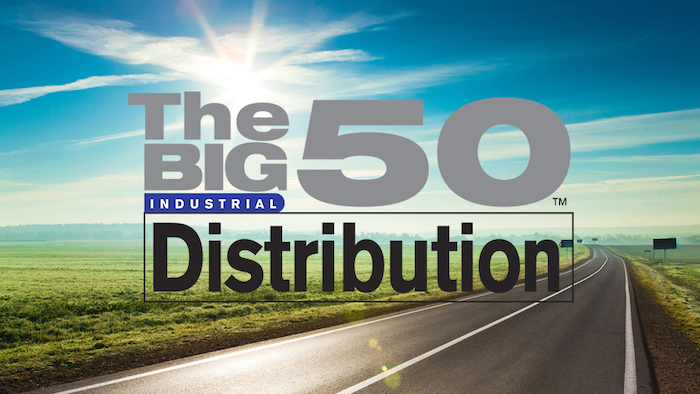 These are trying times in industrial distribution. An ongoing industrial products recession that started when oil prices began their plunge in the summer of 2014 continues to grip the entire sector, putting a strain on distributors and suppliers alike. Many thought conditions would have improved by now, and certain signs say they have. But several prominent distributors say meaningful recovery is still a ways away.

In a post-earnings conference call in early July, MSC Industrial CEO Erik Gershwind discussed an overall pessimistic view across the market, saying that previous notions of industrial recovery “has given way to more belt tightening and less optimism among our customers.” He went on to mention hearing more talk about “furloughs, time off and even some layoffs,” among distributors and suppliers alike. Likewise, Fastenal’s Q2 fiscal report mentioned that though Q1 showed some signs of economic improvement, it expected plant shutdowns and slowdowns to continue into the third quarter.

Industrial Distribution’s 2016 Survey of Distributor Operations — conducted in March — showed that only 42.5 percent of respondents say their sales increased in 2015, down a whopping 27 percentage points from 2014. That coincided with only 45.2 percent saying profits increased, down 16 points. Going further, 68 percent of respondents picked economic conditions as their primary concern.

Overall, it’s still a gloomy industrial economy and distributors have to make the best it. After several quarters in which companies suffered large year-over-year sales and profit decreases, it appears that consolidation and restructuring efforts are taking effect, making those declines considerably smaller than they were for the majority of 2015.

Despite industry downturn, distributors will survive and keep moving forward. They always have. Current market conditions mean that distributors have had to lean up their operations and get them in better physical condition to navigate these times of weakened demand for industrial products.

ID’s annual Big 50 List typically sees companies reporting higher and higher sales year-over-year, which makes the 2016 all the more interesting as many companies brought in less revenue than in 2015. Read on to find out which distributors moved up, down, or are new to the list compared to last year.

Click here to view out the full Big 50 feature in our September/October Digital edition, which includes commentary about, or by, those companies. Here's part one (Nos. 50-31), part two (30-11) and part three (top 10) of our video countdown.

Just missing the list was Annapolis Junction, MD-based Cummins-Wagner, which would have been No. 51 with $111 million. Under the direction of president and CEO Doug Ardinger, Cummins-Wagner has nine locations and 220 employees.

All Big 50 companies are ranked according to 2015 total worldwide sales, and all figures are reported in USD (in some cases converted based on the estimated exchange rate). We obtain information for publicly-traded companies based on annual reports, earning statements and company verifications. For the privately-held companies, we rely on self-reported data and follow-up interviews. Recently published press releases and company website information is also used to supplement data for this report. The Big 50 interviews were conducted via email, survey and phone by Industrial Distribution editorial staff.

The locations and employee headcount figures are as of Aug. 15, 2016.

We elect to refrain from listing any companies we are unable to obtain confirmed revenue numbers for, therefore there are a small number of companies we estimate would have earned a place on the list that were omitted.

For those of you who don’t see your company names (but think you should): Please contact us with your information and we’ll add you to our pool for next year. As always, your feedback is appreciated.

Please feel free to reach out to ID’s editor, Mike Hockett, with comments or questions: mike.hockett@advantagemedia.com