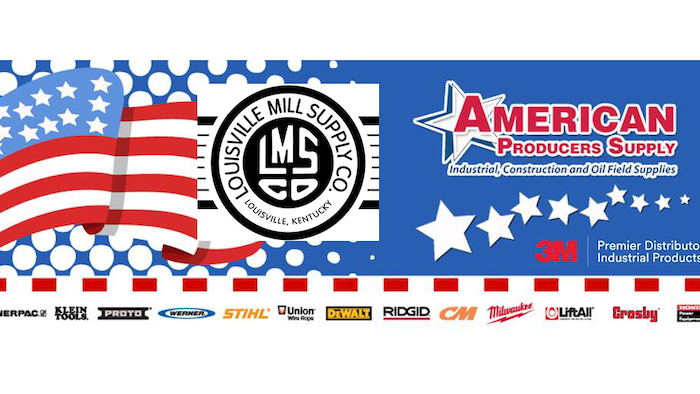 MARIETTA, OH — American Producers Supply Company, a major supplier of industrial, construction and oilfield supplies in the Midwest, has announced the acquisition of Louisville Mill Supply, a longstanding industrial supplier with locations in Louisville, KY, Southern Kentucky and Indiana.

This acquisition extends the geographic coverage of American Producers to now include a large part of Kentucky, Northern Tennesee and a portion of Indiana.

"We are honored to have both Craig and Michele Shellhamer ( the owners) and all of their employees joining the American Producers family," said Joseph Wesel II, executive vice president and general manager of APS. "This acquisition is contiguous to the existing markets covered by American Producers and fits extremely well into the Hub and Spoke concept utilized by APS to provide same day/next day delivery to their entire customer base."

Louisville Mill Supply currently has locations in Louisville, Glasgow, KY and Ferdinand, IN. With this addition, American Producers now has 12 locations in the Midwest. Prior to the acquisition, American Producers serviced customers throughout Ohio, West Virginia, Western Pennsylvania and northern Kentucky with Marietta being the corporate headquarters and branches in Columbus, Sunbury, Lancaster, Cincinnati and Portsmouth in Ohio. In West Virginia, their locations include Huntington and St. Albans (Charleston Area) and just south of Pittsburgh in Bridgeville.

APS also supplies construction tools, products and supplies to many major roofing, highway and general contractors throughout the midwest.

The acquisition occurred in early February. Louisville Mill Supply has been a longstanding industrial supply house that was a third generation family business that started in 1938.

"Both Craig & Michele feel the additional product lines along with special services will be an important factor for the continued growth of Louisville Mill Supply in the future," Wesel II said.

Both companies are 3M Premier distributors, which are a very select group of distributors throughout the U.S. that have significant offerings in several 3M categories and dedicated certified specialist which are highly-trained on various 3M Products.