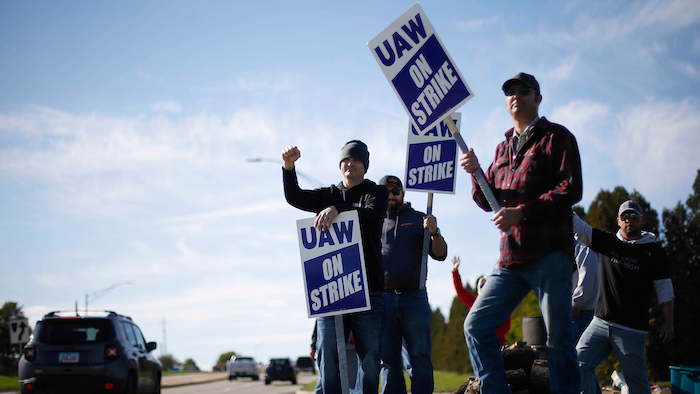 Members of the United Auto Workers strike outside of the John Deere Engine Works plant on Ridgeway Avenue in Waterloo, Iowa, on Friday, Oct. 15, 2021. About 10,000 UAW workers have gone on strike against John Deere since Thursday at plants in Iowa, Illinois and Kansas.
Bryon Houlgrave/The Des Moines Register via AP

Both the Moline, Illinois-based company and the United Auto Workers union confirmed that talks had resumed.

The strike began last Thursday after union members overwhelmingly rejected a proposed contract that would have delivered 5% raises to some workers and 6% raises to others depending on their positions in the factory.

The last major strike at the maker of agricultural and construction equipment came in 1986. This year's strike comes as companies are dealing with worker shortages. Deere had predicted it would report record profits this year between $5.7 billion and $5.9 billion on strong sales.

The contracts under negotiation cover 14 Deere plants, including seven in Iowa, four in Illinois and one each in Kansas, Colorado and Georgia.

The Tools You Need to Get Started with E-Commerce

We've all heard horror stories of e-commerce strategies gone awry, with thousands of dollars spent with nothing to show for it. This new video roundtable gives you the tools you need to get started and be successful with e-commerce. Watch now.
Nov 30th, 2021