The evacuation order for those within 1 mile of the fire remained in effect as of Wednesday night. 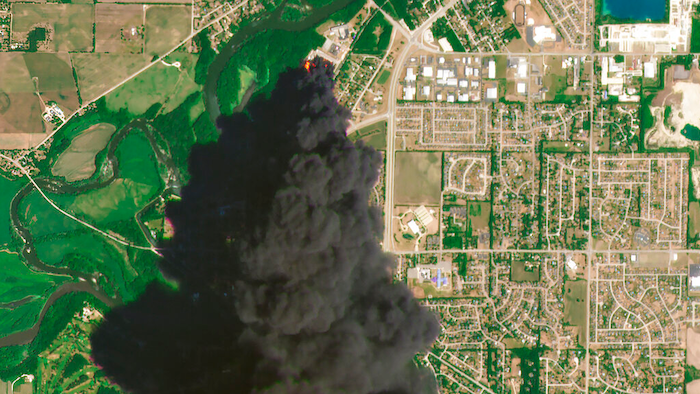 In this Satellite image provided by Planet Labs Inc., a huge plume of smoke and fires can be seen at the Chemtool Inc. plant near Rockton, IL on June 14.
Planet Labs Inc. via AP

ROCKTON, Ill. (AP) — Fire suppression efforts continued Wednesday at a chemical fire near the Illinois-Wisconsin state line as public health officials lifted an outdoor mask mandate for those within a 3-mile radius of the Chemtool plant.

Winnebago County Health Department Administrator Sandra Martell said the carbon monoxide and the hydrogen sulfide in the air remain below federal standards. However, the evacuation order for those within 1 miles (1.61 kilometer) of the fire remains in effect.

“We are particularly concerned about returning individuals into that evacuation zone until we have a more thorough understanding of the composition so we can help prepare homeowners for their return,” Martell said.

The explosions and resulting fires Monday prompted officials to evacuate an estimated 1,000 residents who lived within a 1-mile (1.6-kilometer) radius of the plant, according to Rockton fire Chief Kirk Wilson.

Before pouring fire-fighting foam on the now-destroyed plant in Rockton, Louisiana-based U.S. Fire Pumps dug a trench around the facility and placed booms in the Rock River to prevent residual material from escaping.

“At this point in time I am happy to report there has not been any release of toxins into our waterways or our water system in the village of Rockton,” Wilson said. “The fire is contained. The hazardous materials are contained at this point.”