Officials estimate about 25 unexploded bombs could be found at site on the outskirts of Berlin. 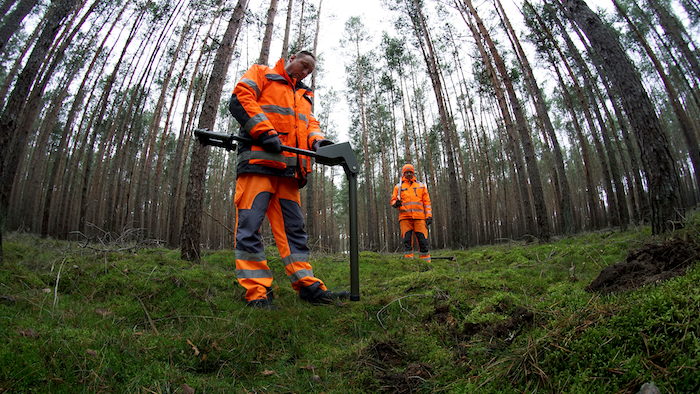 In this Wednesday, Jan. 8, 2020 photo members of a bomb disposal team search for World War II munition at the site of the planned new Tesla Gigafactory in Gruenheide near Berlin, Germany.
AP Photo/Michael Sohn

BERLIN (AP) — Authorities in Germany say 85 kilograms (187 pounds) of World War II ammunition have been found on the site where Tesla plans to build its first European factory.

Local newspaper Maerkische Oderzeitung quoted officials in Brandenburg on Wednesday as saying they estimate about 25 unexploded bombs could be found at the partially wooded site on the outskirts of Berlin, the German capital.

Thousands of unexploded bombs dropped over Nazi Germany by American, British and Russian forces remain undiscovered even 75 years after the end of the war.

This week alone, bomb squads had to evacuate parts of central Cologne and Berlin to defuse unexploded ordnance found during construction work in the cities.

The site for Tesla's planned Gigafactory in Gruenheide was recently valued at almost 41 million euros ($45 million). The company wants to start manufacturing 150,000 electric cars a year from mid-2021, with plans to increase that number to half a million annually.