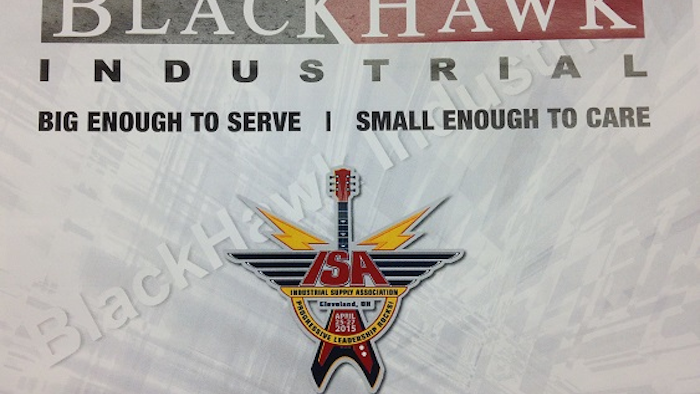 CLEVELAND — BlackHawk Industrial – No. 29 on Industrial Distribution's 2014 Big 50 List – was one of the most popular booths during 'Distributor Booth Day' Sunday at the annual Industrial Supply Association Convention in Cleveland, OH.

In between a busy day of meetings with manufacturer reps and reps from other distributors, BlackHawk CEO Bill Scheller took a few minutes to talk with me about the company's recent acquisition of metalworking distributor Pioneer Tool Supply, about BlackHawk's overall expansion strategy, and it's rapid rise as a distribution leader within a mere 5 years of existence.

"In our organization's past, each one of the original businesses had their own customer service structure," Scheller said. "As we try and put that together as all of BlackHawk, being able to break the silos and put that as one organization will be Chris's role."

"From a regrind shop, custom tool shop — Pioneer does a very good job with that, and Derek has a love for that," Scheller said. "He will help us pull that all together across BlackHawk."

Scheller wasn't shy about what's on the horizon for his company. While he didn't name specifics in terms of what market(s) BlackHawk is eyeing next, he shared that it will stay aggressive in further expanding its geographic reach.

"We have holes in other parts of the marketplace that still need to be filled out," he said. "From our perspective, we're going to continue to grow. We're not going to stop. We would love to find other distributors like Pioneer. If you look at it, people say, 'How are they finding what they're finding? How are they enticing these individuals to become a part of BlackHawk? That resonates that the strategy makes sense.'

Pioneer was the 12th acquisition of 23 different companies by BlackHawk Industrial since the fall of 2010.

During the keynote presentation Saturday at the ISA convention, BlackHawk, in a partnership with SGS Tool Supply, won one of ISA's top awards, the 'American Eagle Excellence in Industry Award.' The duo introduced a solution that enabled a lift equipment manufacturer to reduce cycle time, increase tool life and decrease overall tooling costs. The solution resulted in a gain of 104 production hours over the life of the project, increased tool life from 20 to 240 parts per tool, and reduced cost-per-part by 92 percent. The total annual tooling cost savings was more than $252,000.

So what does the award mean to Scheller?

"Validation," he said. "It's validation for what we've been able to create in 54 months. Two years ago we won Conversion of the Year from Affiliated Distributors. Two years later we win this American Eagle Award doing other things. This is a business  that been around for 54 months. How do you accomplish this is 54 months? You have a team that is having fun together. People want to be part of it — winning awards, doing the right thing.

"It really gets down to validation of what an end user wants us to do — bring the best tooling or best solution. We're adding value. We're not selling a cheaper tool. We're bringing value into spending."