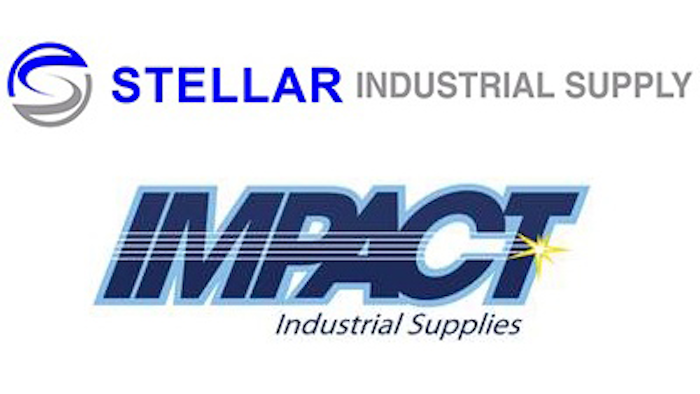 On April 23, Tacoma, WA-based Stellar Industrial Supply announced that it had joined forces with Tampa Bay, FL-based Impact Industrial Supplies in a move that benefits both companies.

The move gives Stellar its 12th branch location, and first outside of the northwest region. With six branches in Washington, three in Oregon, one in Northern California and one in Montana, merging with Impact extended Stellar's reach completely across the country.

At the recent Industrial Supply Association Convention April 25-27 in Cleveland, OH, the two companies had booths on the expo floor in the same aisle, about 50 feet from each other. In-between a busy stream of discussions with other booth visitors on ISA's 'Distributor Booth Day,' I was able to sit down with Stellar CEO John Wiborg and Impact President John Diaz to chat about what made the merger – scheduled to close June 1 – a great fit for both sides.

"We have a pretty strong presence in the northwest. We have business in parts of the southwest. John and I, it opens up the southeast as a third region," said Wiborg, who also is ISA's treasurer. "His business is excellent value-selling and customer-value proposition. They have great culture that fits our culture exactly. It gives us a base to build on. There are product categories that John has been engaged in, and we intend to bring everything we have at Stellar – vending solutions and other product categories John hasn't been in – to gain share down there. In terms of geography, it’s adjacent to business that we already had."

Stellar Industrial Supply, formed by Wiborg in 1988, sells primarily in cutting tools and safety products, but also has divisions for Marine and Renewable Energy. Impact Industrial Supplies was co-founded by Diaz in 1991 as a a value prodiver in MRO and Safety products to a broad array of industries throughout Florida. Diaz joined Stellar's team as Vice President of Sales and Business Development for the southeast region. He echoed Wiborg's comments at ISA.

"As John was saying, our companies are very similar in the value we bring to our customers and the relationships we have with suppliers," Diaz said. "What John brings to me is the resources and the opportunities that have been out there for me. I boil it down to it being the right time with the right people. We’re really excited about joining Stellar and being a part of what they bring to their customers and suppliers.

The merger brings the total employee count at Stellar to 171, with 15 of those coming from Impact.

During the ISA keynote session, the winners of four Allan Chartier $1,000 scholarships were announced for ISA member employees to continue their education or career development in industrial supply. Stellar Industrial's Christine Bruns was the winner for ISA's 'Distributor/Wholesaler' category.

"She was thrilled," Wiborg said about the award. "ISA’s got these scholarships and I got an email about it a few months ago. I forwarded it to all staff and said this is something available for all ISA members staff for anyone interested. I heard she was applying for it a little while ago. When we learned she was the recipient, we were very pleased as a company and she was thrilled. It’s great for her. I high-fived her when she got the award. It was very neat."