A Homecoming For U.S. Manufacturing? 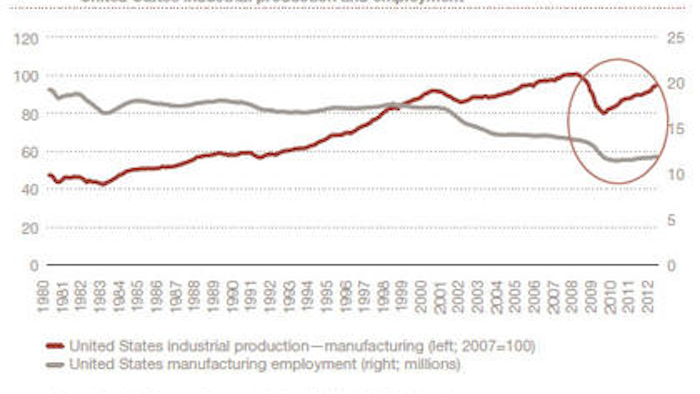 NEW YORK― Consensus views on a U.S. manufacturing resurgence have largely centered on rising labor costs in markets such as China as the key driver of re-shoring back to the U.S. However, a new PwC US report, A Homecoming for U.S. Manufacturing?, reveals that while rising labor costs are part of the story, a range of factors—including transportation and energy costs and protecting the supply chain—could drive a sustained manufacturing renaissance in the U.S. beyond any cyclical recovery, potentially improving investment, employment, production output and research & development (R&D).

“The reviving industrial manufacturing sector is instrumental to U.S. economic recovery,” said Bob McCutcheon, PwC’s U.S. Industrial Products leader.  “Beyond the cyclical rebound, however, a host of structural changes is emerging that may lead to the U.S. becoming an important location for basing production and R&D facilities for several industries.  In addition to trends in labor costs, other factors include the need to reduce transportation and energy costs; the emergence of the U.S. as a more attractive exporter and the relative attractiveness of the U.S. markets.”

Relocating manufacturing production in the U.S. generally holds greater advantages for some industries over others.  When taking into account costs spanning labor, materials, transportation and energy, the PwC report shows that chemicals, primary metals and heavy equipment manufacturing industries stand to benefit most from maintaining or expanding facilities in the U.S. given opportunities and cost incentives to re-shore domestically.  Wood, plastic and rubber products companies could also benefit from changes in domestic costs, but lower net imports in these industries may limit the full economic benefits of on-shoring in the U.S.

“Industrial manufacturers may increasingly rethink their U.S. strategies, including the merits of continuing to separate production and R&D and producing abroad and importing back to U.S. buyers.  Depending on the industry, there may be considerable benefits to establishing regionalized supply chains and R&D facilities in the U.S., such as reducing costs, shortening lead times, protecting intellectual property and mitigating many of the risk factors inherent in developing markets,” added McCutcheon.

The PwC report outlines seven factors that may play key roles in making re-shoring decisions, as well as in determining whether or not the U.S. will become a more competitive and attractive market for manufacturing expansion:

Transportation and Energy Costs:  The bull market in energy commodities over the last decade has contributed to a major increase in transportation costs for manufacturers with global supply chains.  As a result, some machinery companies are producing more in the U.S. for sale in North America.  Given growing global demand for energy, transportation costs will likely remain elevated, making production closer to home more attractive.  This can also cut down on lead times, reduce inventory levels, mitigate some currency risks, increase control over intellectual property and reduce supply chain disruption risks.  In addition, technical progress in extracting natural gas from shale in the U.S. has created new investment opportunities for manufacturers across several industries, particularly in chemicals and metals, due to more affordable energy and greater downstream demand.

Currency Fluctuations:  The U.S. dollar generally depreciated during the last decade, and China’s currency has risen moderately, which narrows the cost gap between producing in the U.S. and importing from China for domestic consumption. In addition, the secular decline in the U.S. dollar helps make the U.S. a potentially more competitive location to manufacture for exports. This is contributing to strong growth in the export of goods since the end of the recession. An appreciation of the Yuan relative to the U.S. dollar may continue longer-term as China’s economy grows, which could provide some advantage to U.S. manufacturers.

U.S. Market Demand:  While China and other emerging markets are forecast to continue to grow GDP at a faster clip than the U.S., the disparity in wealth, as measured by real GDP per capita, is expected to persist with the U.S. dwarfing China and other emerging markets. This difference in the relative standard of living, as well as the size of the U.S. market, supports investment in new domestic production of goods targeted for U.S. consumption.  At the same time, global manufacturers with a multi-region strategy that source from Asia, for example, are likely to keep production in that region to serve those local markets, consistent with the trend toward regionalization of manufacturing for the largest global manufacturers.

U.S. Talent:  The gap in the level of higher education and training between the U.S. and China has narrowed, though the U.S. still holds a significant advantage.  It is possible that the U.S. workforce will remain competitive for the foreseeable future owing to institutional advantages in education and experience; however strength in emerging economies is growing. Workforce training has also been commonly cited as a driver in recent manufacturing investment decisions regarding which states to operate in, indicating that manufacturers are keen to locate where there are vocational programs in place to develop skilled workers.  Conversely, despite the relative strength of the U.S. labor force, the aftermath of the housing bubble has slowed worker mobility and may contribute to labor market friction.

Availability of Capital: Although commercial and industrial lending demand has recovered and credit standards have come back down from levels reached during the financial crisis, banks have resumed tightening credit standards.  In addition, there is evidence that borrowing in China has become more difficult due to increased capital requirements for banks and tighter lending for exporters.  The balance of risks favors some continued credit tightening in several key economies to stave off inflation.  As a result, manufacturers may shy away from longer supply chains and the risks they carry including inventory tied up in transit, particularly in industries with shorter product cycles or high spoilage.

Tax and Regulatory Climate:  The U.S. now has the highest statutory corporate tax rate among developed countries as of mid-2012.  While U.S. corporations tend to have a much lower effective tax rate, this and other factors have spurred talk of tax reform to boost economic growth and employment.  Proposals include a lower statutory rate, tax incentives and increasing—or making permanent—the R&D tax credit.  However, the tax and regulatory environments bring uncertainty to the current expansion of domestic manufacturing.

U.S. Labor Costs:  Higher labor costs in emerging economies, especially China, are challenging profitability for some industrial manufacturers.  This concern may not ease as the Chinese government’s policies and the rising cost of living in urban areas add to wage pressures.  From 2008 to 2011, China’s hourly manufacturing labor costs rose by over 80 percent and are expected to rise at a similar rate for the next four years.  This compares with the estimated increase of around 10 percent for the U.S. over the same time period.  However, the cost premium, based upon the difference in absolute wages between the U.S. and China, has continued to expand, making it possible that labor arbitrage involving China and other low labor cost emerging markets will persist.

About the PwC Network
PwC firms help organizations and individuals create the value they’re looking for. We’re a network of firms in 158 countries with close to 169,000 people who are committed to delivering quality in assurance, tax and advisory services. Tell us what matters to you and find out more by visiting us at www.pwc.com.

© 2012 PricewaterhouseCoopers LLP, a Delaware limited liability partnership. All rights reserved. PwC refers to the US member firm, and may sometimes refer to the PwC network. Each member firm is a separate legal entity. Please see www.pwc.com/structure for further details.