Nothin' but Blue Skies tells the story of how the country's industrial heartland grew, boomed, bottomed, and hopes to be reborn. Through a blend of storytelling and reportage, Edward McClelland delivers the rise, fall, and revival of the Rust Belt and its people. 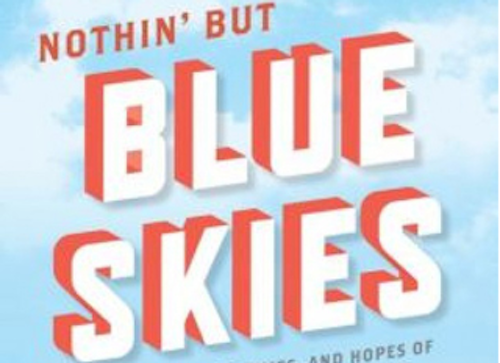 The Upper Midwest and Great Lakes region became the "arsenal of democracy," the greatest manufacturing center in the world, in the years during and after World War II, thanks to natural advantages and a welcoming culture. Decades of unprecedented prosperity followed, memorably punctuated by riots, strikes, burning rivers, and oil embargoes. A vibrant, quintessentially American character bloomed in the region's cities, suburbs, and backwaters.

But the innovation and industry that defined the Rust Belt also helped to hasten its demise. An air conditioner invented in Upstate New York transformed the South from a sweaty backwoods to a non-unionized industrial competitor. Japan and Germany recovered from their defeat to build fuel-efficient cars in the stagnant 1970s. The tentpole factories that paid workers so well also filled the air with soot, and poisoned waters and soil. The jobs drifted elsewhere, and many of the people soon followed suit.

Nothin' but Blue Skies tells the story of how the country's industrial heartland grew, boomed, bottomed, and hopes to be reborn. Through a blend of storytelling and reportage, Edward McClelland delivers the rise, fall, and revival of the Rust Belt and its people. McClelland recently talked with IMPO about why he decided to write this book, the demise of the Rust Belt, and what he sees for the future of American manufacturing.

Q: What prompted you to write this book?
A couple things. I went to high school across the street from a Fisher Body auto plant in Lansing, Mich. Our school was perfectly integrated into the industrial life of Michigan: students would simply walk across the street after graduating and take their place on the assembly line. The plant was demolished in 2006, which got me to wondering, “What happened to all the factories that used to define communities here in the Midwest?” The other was an awareness that my generation – Generation X – didn't have it as easy as the Baby Boomers. When I entered high school, in 1982, Michigan's unemployment rate was 14 percent. One of my teachers lectured, “It used to be that you didn't have to study because you could just walk across the street and get a job in that plant. Those days are gone. You're going to have to work hard and study and go to college.” I wanted to revisit the late '60s, when the unemployment was never above four percent.

Q: How did the innovation and industry that defined the Rust Belt also help hasten its demise?
It's been very difficult for many cities to reuse industrial land left behind after factories close, because the sites are so polluted. In Lackawanna, N.Y., outside Buffalo, the Bethlehem Steel plant is still untouched after over 30 years. It's the site of 14 wind turbines that provide power to surrounding communities. The land is worthless, so they have to pull wealth from the air now. Flint, Mich., is having the same problem with its enormous Buick City complex. From the book: “After a car maker or a steel mill wears out a factory, extracts all the tax breaks a treasury will bear, and accumulates more obligations to its workers than the stockholders will bear, it flees town like a deadbeat husband, leaving a worn-out, exploited patch of land no else will touch. An industrial city follows the same life cycle as a boxer, or a prostitute. Its native beauty, the freshness of its earth and water, the youth and strength of its people, are used up and discarded. Then it’s on to the next town.”

Another example is Syracuse, N.Y., once home of Carrier and “The Air Conditioning Capital of the World.” Air conditioning made the Sun Belt possible, then Carrier moved all the jobs to Georgia and Tennessee, closer to their customers – and farther from labor unions. Syracuse invented the appliance that caused its own demise.

Q: Was the Rust Belt’s demise, which you say was hastened by its own innovation and industry, an accident of history – or will we see this happen again?
In many ways, it was an accident of history. The Lower Midwest was in the right place at the right time to become the industrial powerhouse of the world. It was situated midway between the iron ore of the North Country and the coal of Appalachia – the two essential ingredients of steel – and the Great Lakes provided transportation for both the raw materials and the finished products. Also, the United States came out of World War II as the only country whose industrial capacity hadn't been destroyed. This country will never be as prosperous as it was in the 1950s and the 1960s, before the rest of the world recovered from the war and began to challenge us economically. That was a golden age in America.

Q: Is there hope for the American industrial heartland to be reborn?
Americans are the most creative, innovative people in the world. I like to say that Michigan did not become great because of the auto industry, the auto industry became great because of a Michigander – Henry Ford. One of the companies I profiled in the book is Niowave, which manufactures particle accelerators for medical and defense uses. Niowave is located in Lansing and employs many retired GM skilled tradesman to build its products. The company's founder told me that Lansing is one of the few places where he could run his business, because it has both a major research university and an ethic of manual craftsmanship.

Q: What do you think U.S. manufacturing will look like in the future?
I think high-tech manufacturing and skilled labor are the future of U.S. manufacturing. We can never compete with Third World sweatshops. But the Third World can't compete with our education system, our ingenuity, or our work ethic. Another company I profiled was Bitzer Scroll, in Syracuse, N.Y. Bitzer Scroll produces high compression chillers for use in hotels and restaurants. It employs engineers and craftsmen who didn't go South with Carrier. Even though manufacturing is not as big a sector as it once was, our education system needs to keep training young people in the shop trades.