What Happened To Critical Thinking?

At a time when the world’s economic, social, and political problems have become very hard to interpret, I see people opting for simple solutions to complex problems, looking for structure where there isn’t structure, lusting after political prophets who offer one line slogans, and becoming more comfortable with the black and white solutions of a polarized nation. 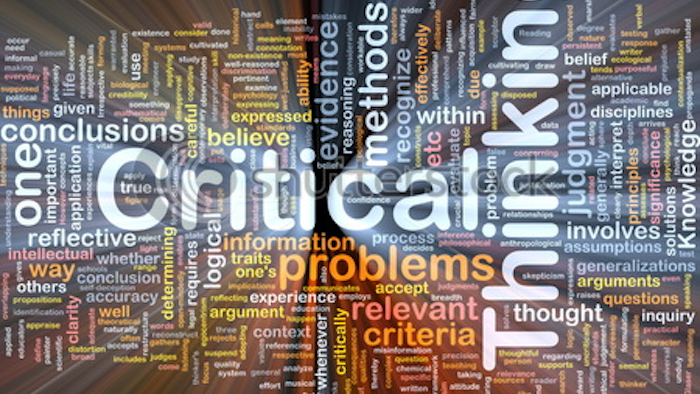 Today in America our economy is on the slide, manufacturing continues to decline, unemployment is over 8 percent, education is not working for everybody, our infrastructure is crumbling, and the living standards of the middle class are in a slow decline. At a time when the world’s economic, social, and political problems have become very hard to interpret, I see people opting for simple solutions to complex problems, looking for structure where there isn’t structure, lusting after political prophets who offer one line slogans, and becoming more comfortable with the black and white solutions of a polarized nation.

We live in a complex world where problems and issues are difficult to understand, yet decisions and choices must be made. The concept of critical thinking goes back to Socrates but in 1906 William Graham Sumner said that the idea of critical thinking is “the examination and test of propositions of any kind which are offered for acceptance, in order to find out whether they correspond to reality or not”. He goes on to say that “Men educated in it cannot be stampeded. They are slow to believe. They can hold things as possible or probable in all degrees without certainty and without pain. They can wait for evidence and weigh evidence. They can resist appeals to their dearest prejudices.”

It seems to me that this notion of critical thinking (also embraced by educational theorists at the turn of the 20th century) is really declining in popularity in this new millennium.

Simple Solutions
I have come to understand that people are very attracted to simple answers to complex problems because they appeal to the need for certainty. Chance and ambiguity are not acceptable because they complicate understanding the problems. The simple message is even more appealing if it feeds people’s prejudices and superstitions. In this instance, accepting the simple message simply confirms long held suspicions and beliefs and reality is automatically distorted.
What I see happening in today’s debates is that people begin their argument with a conclusion and then make an effort to find the facts and examples that will support the conclusions. The process ends at this point and testing, peer reviews, and negative criticisms are largely ignored.
Conspiracy theories have thrived for centuries, and I have often wondered why they are so popular with the public. I found a good answer in a Scientific American article written by Thomas Gruter:  “One basic answer is that theories promote a simple message. Whatever has happened, there is a single force-usually an evil one- behind it. Humans tend to drastically simplify complicated issues, reducing them to a lone cause whenever possible. This exercise brings order out of chaos; it makes the complex world intelligible and once a person believes he understands how something works, he holds fast to the belief. Trust in a secret master plan created by a powerful organization offers simple cause and effect relationships that build along linear chain of events. Chance and ambiguity have no role, which is comforting even in the face of sinister forces.”
People are much more willing to accept conspiracy theories when there is a general mistrust and a negative outlook on the future. At this point in time in the U.S., a huge majority of citizens are very mistrustful of Congress and government in general. They are also very fearful of what will happen to them in the economy which adds to the acceptance of conspiracy theories and simplistic answers.

Critical Thinking
The answer, in my opinion, is some variation of the concept of critical thinking. But I will admit that critical thinking is not easy to do. Critical thinking is pursuing the real facts (the real truth of a problem) facing them, and then making a realistic interpretation – not turning over the responsibility of digging out and interpreting the truth to those who profess to be the experts or who ask to do your thinking for you. This means not giving in to the urge to subjugate all current problems to simplistic answers; and most of all, not giving in to the notion to let your personal feelings, emotions, unquestioning faiths, and fear of change dominate your reasoning.
As a model for critical thinking, I like to use the scientific method because it is simply a way of looking at the world as it is, rather then how we would wish it to be. If you would like to accept the challenge of becoming a better critical thinker, here are some suggestions:

1. Reject standardized formats on thinking and problem solving. Many people want to believe that there are quantifiable solutions to every problem. It isn’t true, because all events that are dominated by humans are, at best, ambiguous and unpredictable.
2. Teach yourself to approach problems with multiple perspectives.
3. View life and all events as relative rather than absolute or universal. Borrow on Einstein’s example.
4. Try to see the opportunities in change because change is inevitable. You may not embrace it, but you must learn to accept it.
5. Learn to recognize how your own beliefs and prejudices affect your thinking. Rather then accept a claim that appeals to them emotionally, people need to pursue the facts wherever they may lead.
6. Have a healthy skepticism for all politicians and/or media messages. Everyone who makes a press release is pushing a viewpoint and putting a spin on a subject that is in their favor. Don’t accept one side of the story. Pay attention to people who offer a hypothesis and then support it with facts that you can investigate.
7. Try to develop a “BS meter” inside your brain. Fantastic claims require fantastic evidence. It is okay (if not necessary) to question fantastic claims and ask for more evidence, and it is okay to not accept a claim that doesn’t make sense.
8. Our lives are dominated by ambiguity and uncertainty. My own approach to complex problems is to accept that there is seldom a case for complete certainty. There are only varying degrees of uncertainty, and we must continuously search for the highest probability of truth.

Unless we can make some headway in understanding the real truth of our economic and political problems, we will continue to move towards a society where irrationalism will prevail. As I see it, the only real path through our 21st century problems is to pursue truth, face reality, and to accept compromise. Continuing with our uncompromising, polarized society is a road back to poverty and economic decline.

Mike Collins is the author of Saving American Manufacturing. You can find him on the web at www.mpcmgt.com.