Utility demand for power distribution solutions was steady in the quarter while investments in power transmission systems remained selective.

ZURICH, Switzerland — ABB’s focus on profitable organic growth and the related strategic initiatives resulted in a strong order increase across all regions in the third quarter.

Total orders rose to $11.2 billion, boosted by large orders (above $15 million) including a power transmission link in Europe, a mining automation project in the Americas, and a gas treatment plant in Africa. Base orders (below $15 million) increased in every region. Continued successful implementation of ABB’s service strategy resulted in a 10-percent increase in service orders in the quarter.

“Our program for profitable organic growth has successfully created healthy order momentum across all regions,” CEO Ulrich Spiesshofer said. “I am encouraged to see attractive large project wins and five consecutive quarters of base order growth.”

In line with a lower order backlog at the start of 2014, revenues were 6 percent lower (4 percent like-for-like4) at $9.8 billion. The operational EBITDA margin was 14.3 percent in the third quarter versus 15.7 percent a year earlier. The margin reflected lower revenues and the result in Power Systems (PS).

“In PS, we achieved significant milestones in project execution, continued to de-risk the portfolio and implement a new business model for offshore wind projects,” Spiesshofer said. “The division broke even in the quarter. We continue to drive our focused action program to complete the turnaround and address the remaining challenges ahead. Overall, our efforts on relentless execution, including our cost savings program, are on track.”

Net income was $734 million and basic earnings per share was $0.32. Targeted net working capital management measures supported cash from operations, which increased 29 percent in the first nine months. ABB initiated the $4-billion share buyback program announced in September and purchased shares with a value of approximately $350 million during the quarter.

“We are driving profitable growth through penetration, innovation and expansion, aimed at growing ahead of the global economy.” the CEO added. “We will carefully manage costs and cash as the short-term outlook for the global economy is increasingly uncertain. The entire management team is taking decisive actions in line with our Next Level strategy, which was announced at our Capital Markets Day in September.”

Utility demand for power distribution solutions was steady in the quarter while investments in power transmission systems remained selective. Industrial demand varied by region and end market, with positive demand in oil and gas and general industry. Demand in the mining sector was stable at low levels. Infrastructure and construction markets were mixed, while rail and marine transportation demand was positive.

Base orders were up 3 percent (5 percent like-for-like) on a combination of growing demand in some of ABB’s early-cycle product businesses—such as wiring accessories and low-voltage motors—as well as growth initiatives across many businesses, products and geographies. Base order growth was strongest in the Discrete Automation and Motion division and in the two power divisions.

Service orders increased 10 percent and represented 15 percent of total orders, down from the year-earlier quarter due to the effects of the higher total order intake.

Revenues declined in the third quarter (down 4 percent like-for-like). Higher like-for-like revenues in the Discrete Automation and Motion and Low Voltage Products divisions were more than offset by a decline in the Process Automation, Power Products and Power Systems divisions, where opening order backlogs were lower. Service revenues were steady and reached 16 percent of total revenues, up from 15 percent in the same quarter a year earlier.

The order backlog at the end of September amounted to $27 billion, an increase of 4 percent compared to the end of the same quarter in 2013 and 9 percent higher than at the end of 2013.

The Take 10 Distribution Series is a new video collaboration in which we discuss business imperatives vital to the distribution sector and gain insights from leading experts in their fields.
Nov 12th, 2021

Today, sales staff can understandably get lost in the mire of data. Simplifying the organization with accurate planning is the ultimate goal.
Aug 11th, 2021 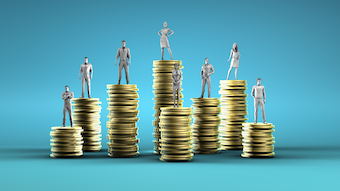 In the third and final part of this series, industrial distribution sales representatives and managers get real about their compensation.
Aug 5th, 2021
Follow Us
Most Recent