While most women running the largest companies saw a pay increase, their median pay actually fell 2%. 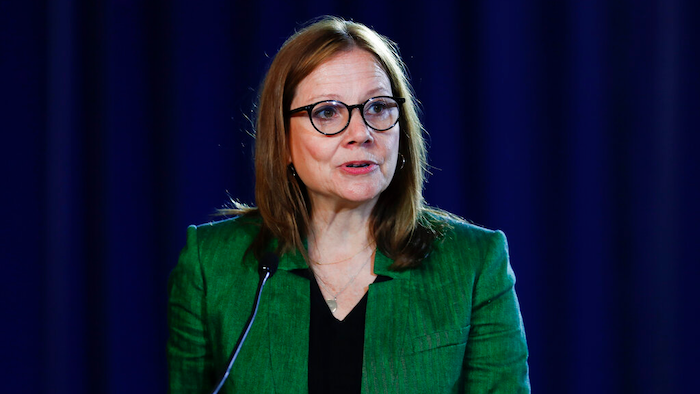 In this July 16, 2019 photo, General Motors CEO Mary Barra speaks during the opening of their contract talks with the United Auto Workers in Detroit.
AP Photo/Paul Sancya, File

Most of the women running the biggest U.S. companies saw their pay increase last year, even as the pandemic hammered the economy and many of their businesses.

Despite those gains, however, the median pay for female chief executives actually fell in 2020. Already a small group, they saw several high-profile women leave their ranks last year. That means changes in pay for only a few helped skew the overall figures, highlighting just how slow diversity has been to catch on in Corporate America’s corner offices.

Of the 342 CEOs in the AP’s and Equilar’s compensation survey of S&P 500 companies, only 16 were women. That’s down from 20 a year earlier, as CEOs like IBM’s Virginia Rometty left their posts. The survey includes only CEOs who have served at least two full fiscal years at their companies, in order to avoid the distortions of big sign-on bonuses. The companies must have filed proxy statements between Jan. 1 and April 30.

The majority of female CEOs in this year’s survey saw a raise in compensation: 81% of them (13 of 16), versus 60% of all male CEOs in the survey. But Duke Energy CEO Lynn Good saw a nearly 3% decline in compensation to $14.3 million. She’s right in the middle of the pay scale among the survey’s women CEOs, so that helped set the median pay for them last year at $13.6 million. Median means half made more than that level, and half made less.

That level marks a 1.9% drop from the median that those same female CEOs earned a year a before. And it compares with a median of $12.6 million for all male CEOs in this year’s survey, which is 5.2% higher than the median for them from a year earlier. The overall median for the survey was $12.7 million.

While the number of women in the survey dropped last year, experts say change is happening, just very slowly as companies have failed to properly recognize and prepare more women for the role.

“It’s a slow process,” said Lorraine Hariton, President & CEO of Catalyst, a nonprofit that aims to advance women in the workplace. “But the reasons are we are still dealing with cultures embedded with unconscious bias and building the pipeline of women CEOs takes time.”

Lisa Su, CEO of chipmaker Advanced Micro Devices, topped the list with a compensation package worth $27.1 million. That included a base salary of just over $1 million, a cash bonus worth $2.5 million and stock and option awards worth nearly $23.5 million. AMD’s stock nearly doubled in 2020 after being the top-performing stock in the S&P 500 the prior two years.

A year ago, Su was the highest paid CEO in the Equilar analysis, man or woman, with a pay package worth $58.5 million, largely due to stock grants worth $53.2 million.

Overall, many CEOs took a cut in salary last year because of the pandemic, but got more in stock awards and other compensation. Pay for female CEOs largely followed a similar pattern but because of the small sample size it is difficult to draw conclusions as any one minor adjustment can skew the results.

There are some signs of change, with more women in top management. JPMorgan Chase recently placed two women in roles where they could potentially succeed CEO Jamie Dimon. And executive recruiting firms say they see increased interest from companies, particularly as research shows that having a more diverse company leads to better results.

Don Lowman, senior client partner at Korn Ferry, expects the evolution will continue as well as new leadership with different attitudes and perspectives help shape companies moving forward. Lowman and Stevenson said this is true not just for women but for leaders of different races as well. The executive suite has long been dominated by white males.

“This is a law of supply and demand,” Stevenson said. “We have the demand side cultivated (in the boardroom), but now we need the supply side to be cultivated.”

The major year-over-year gains and declines reflect a stark contrast in the product demand compared to the early pandemic days.
May 6th, 2021
Follow Us
Most Recent