A warehouse building boom — and a scarcity of available workers to staff them — reportedly resulted in the largest wage increase among warehouse workers in more than 10 years.

A warehouse building boom — and a scarcity of available workers to staff them — reportedly resulted in the largest wage increase among warehouse workers in more than 10 years.

The Wall Street Journal, citing data from logistics staffing firm ProLogistix, reported that starting pay for those employees climbed to $12.15 per hour in February, a 6 percent increase compared to February 2016 and more than double the average wage increase in the U.S. over that span.

Retail giants — including Amazon and Walmart — hope to capitalize on the boom in e-commerce by rapidly building and leasing the distribution facilities needed to quickly ship items to customers.

Although automation systems in new warehouses tend to suppress the job gains ordinarily seen in the past, the paper noted that attracting new workers is nonetheless difficult since the country remains at essentially full employment.

Warehouse positions are generally low-paid and high-turnover — with little training or education required — but companies are reportedly offering everything from bonuses, pay raises and flexible scheduling to gift cards or employee events in order to prevent poaching.

"A guy who makes $10 an hour, you offer $10.25, he’s going to leave,” Allegiance Staffing president Tom Landry told the Journal. "That's another tank of gas."

And as shoppers grow more and more comfortable with e-commerce, the problem doesn't appear likely to abate soon.

Federal labor numbers showed the warehouse and storage workforce grew by more than 5 percent in March compared to the same month last year, and Amazon alone recently announced plans to add 25,000 part-time warehouse workers over the next 12 months. 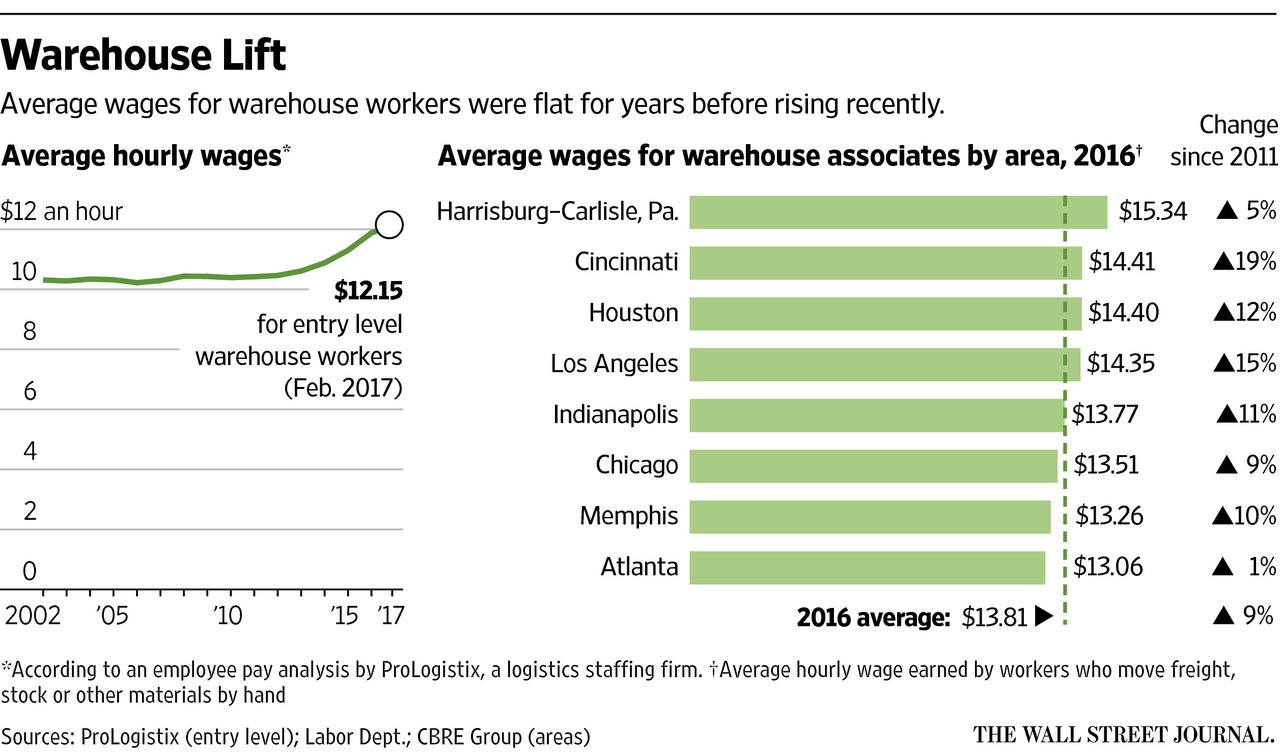 Current estimates indicate there are about 300,000 unfilled jobs in the construction industry.
Jun 11th, 2019

Manufacturers and distributors spent, on average, $4.2 million on training last year.
May 28th, 2019

Participants of the webinar will learn: • How to use IBP to clearly connect strategy to portfolio management, demand management, and supply management. • How IBP helps executive management to better focus on what matters to ensure the execution of strategy. • How to stay out of the “weeds” day to day and lead the organization to realize its strategies and financial goals.
Oliver Wight

The working dead—employees with low motivation—can be devastating to your company’s performance and long-term potential.
May 14th, 2019

What a Great Boss Looks Like—How to Enable New Employees

Leadership is about teams producing results with a purpose mindset.
May 13th, 2019

The urge to innovate is strong, but some approaches to workforce development have persisted for a reason.
May 8th, 2019

Here are a few steps you can take to help illustrate to new graduates the opportunities that abound in supply chain and logistics, allowing you to attract the newest members of the workforce to your business.
Apr 16th, 2019

In addition to the worker shortage, there’s also a skills gap to contend with.
Mar 5th, 2019

A UPS driver proved that man is a dog’s best friend after rescuing one from a freezing pond during his shift just before the Christmas holiday.
Rachelle Blair-Frasier
Jan 18th, 2019

Survey Finds Most Employees Want to Learn on the Job by Video, in Five Minutes or Less

The second edition of “Voice of the E-Learner” survey asked 1,327 workers from manufacturers and distributors in the electrical, plumbing, HVAC and industrial tools industries about their perceptions of online learning.
Dec 13th, 2018

Last week, Amazon raised its company-wide minimum wage to $15 per hour for all full-time, part-time and temporary workers in the United States, a move that is estimated to impact over 350,000 people.
Nov 6th, 2018