Fixing Walmart's 'Made In America' Infographic

The Alliance for American Manufacturing responds to Walmart's infographic — which touted selling made-in-America products — with an infographic of its own. 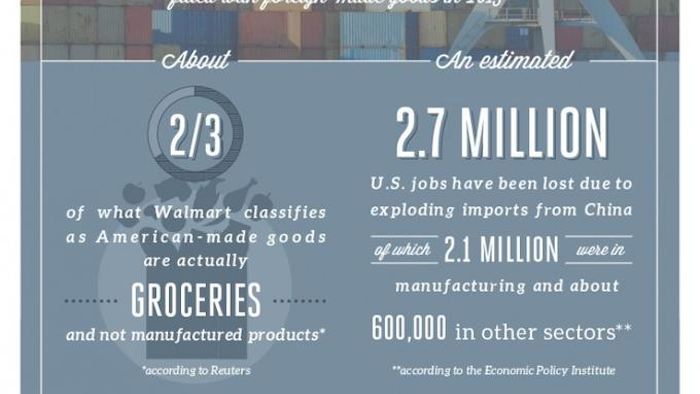 The web filter at the Alliance for American Manufacturing (AAM) caught a big ol' piece of chaff this week, in the form of a release from Walmart. America's largest retailer has announced plans to purchase $250 billion worth of American-made goods over the next decade. It decided to share the good news of its sudden economic patriotism via an infographic, which is heavy on the fancy font but light on context.

So AAM took a stab at filling that context in, via an infographic of its own. Sure, Walmart is spending a big chunk of change on American-made products. But the company regularly moves gigantic gobs of money around, so is it spending any more on America than usual? And where are the rest of the goods on its shelves coming from? Does Walmart deserve a round of applause (that it started itself) for cozying up to the Made in America movement? See below: