Fastenal — No. 5 on Industrial Distribution's 2019 Big 50 List — reported its 2019 fourth quarter and full-year financial results on Friday, showing that sales slowed over the last three months of the year, while 2019 was overall a solid year for the company.

The Winona, MN-based company said Q4's 3.7 percent sales increase was driven by higher unit sales related to its growth drivers, most notably coming from industrial vending and Onsite locations, while also citing an overall weakened industrial economy as of late.

"The general slowing in economic activity that we experienced in the second and third quarters of 2019 continued in the fourth quarter of 2019," Fastenal said in its Q4 earnings release. "This general softness was exacerbated in December by holiday timing and longer than usual year-end plant shutdowns."

Fastenal didn't state its total e-commerce sales figures or percent of its overall sales, but said its Q4 sales via e-commerce were up 25 percent YoY, while total 2019 e-commerce sales jumped 32 percent, including 35 percent from its national account customers.

"The number of closings reflects both normal churn in our business, whether due to exiting customer relationships, the shutting or relocation of a customer facility, or a customer decision, as well as a review of certain underperforming locations," Fastenal said. "Our in-market network forms the foundation of our business strategy, and we will continue to open or close locations as is deemed necessary to sustain and improve our network, support our growth drivers, and manage our operating expenses."

Fastenal broke down its customer end-market profile as follows: 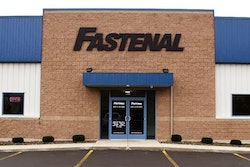