In another example illustrating just how prevalent the threat of wire fraud is to manufacturing companies, a newly-reported case in Ohio involved a former Verizon employee duping a major industrial distributor out of nearly $1 million in fraudulent purchases.

The U.S. Attorney’s Office for the Southern District of Ohio reported February 2nd that a 44-year-old Newark, Ohio man was been indicted by a federal grand jury for allegedly causing about $1 million in fraud while he was a network engineer at Verizon.

A 16-count indictment said that from July to October 2020, the man used his company credit card to pay for personal expenses like hotels & resorts, restaurants, bars, pawn shops and auction houses.

The man allegedly placed 46 unauthorized orders to Grainger and personally picked up most of the equipment purchases, which totaled about $936,000. He then allegedly used the proceeds to buy two boats and a motorcycle.

A news release from the U.S. Attorney's Office didn't mention how the man obtained those proceeds.

Court documents show that after that, the man placed another 20 unauthorized orders to Grainger that totaled nearly $954,000, but never obtained the equipment.

But it gets even better. When he was arrested this past August, the man was allegedly carrying an illegally-possessed pistol after he was previously convicted of a felony crime.

Besides the gun charge, he is charged with 10 counts of wire fraud and five counts of access device fraud. 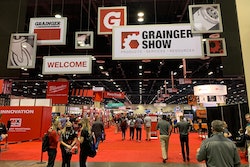