Total industrial production dipped 0.1 percent last month, due to a sharp decline in output from the volatile mining and utility sectors. 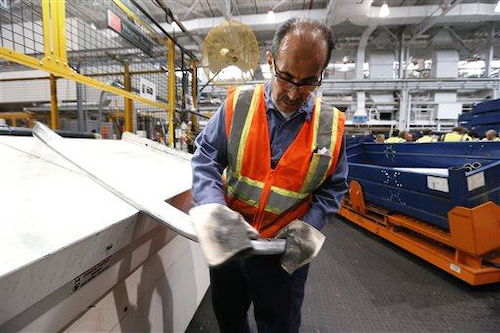 Output at manufacturing plants rose 0.2 percent in October, the Federal Reserve said Monday. Gains came from the rising demand for machinery, plastics, clothing and furniture. Factory output has risen 3.4 percent over the past 12 months.

But in October, the automotive sector tapped the brakes for the third straight month. Auto production fell 1.2 percent in October, after declines of 1.9 percent in September and 7.2 percent in August. Despite the slowdown, motor vehicle sales were strong last month.

Total industrial production dipped 0.1 percent last month, due to a sharp decline in output from the volatile mining and utility sectors.

The report was consistent with annualized economic growth of roughly 2 percent a year, significantly below the 3.5 percent rate during the July-September quarter, said Steven Ricchiuto, chief economist at Mizuho Securities.

Manufacturing has steadily helped fuel economic growth for much of 2014.

Employers have added more than 2.2 million jobs so far this year and the unemployment rate has plunged to a six-year-plus low of 5.8 percent. Stocks have rebounded in the past month to record highs after having slipped in the middle of October. Demand for home electronics, appliances, furniture and carpeting have all perked up.

That growth faces new challenges because of a broadening slowdown in Europe, China and Japan. On Monday, Japan unexpectedly slid back into recession, sending global markets downward. As economies overseas have struggled, the demand for American-made goods has waned. So far, greater domestic demand has more than offset the declines from abroad.

"While industry should be hit harder than other sectors, the strength of domestic demand will prevent a major slowdown," said Paul Dales, senior U.S. economist at Capital Economics.

Strong factory production over the past 12 months has trickled into hiring and new paychecks that have bolstered growth in the broader economy. Factories added 170,000 jobs during that period that pay on average more than $19 an hour, according to the Labor Department.

But other manufacturing indicators have been uneven in recent months.

Manufacturing firms are increasingly confident, according to the Institute for Supply Management, a trade group of purchasing managers.

The organization's manufacturing index rebounded to 59 last month from 56.6 in September. Any reading above 50 signals expansion. The result matched a three-year high reached in August and reversed a September drop, all of which suggests that factory output will continue to drive growth.

Out of 18 sectors in the index, only petroleum and coal reported that activity had decreased. Manufacturing exports grew last month but at a slower pace than September.

At the same time, more Americans are buying autos despite the slowdown in motor vehicle production last month.

Other indicators show, however, that manufacturers are pulling back.

Orders to U.S. factories have fallen in September and August, the Commerce Department reported earlier this month.

Those declines largely came from a drop-off in demand for aircraft, an extremely volatile category month-to-month. Excluding the volatile transportation sector, factory orders have been flat for the past two months.