ID executive editor Anna Wells ponders if small businesses spend more time thinking about their advantages or about their disadvantages.

While wholesale-distribution employs nearly 6 million people in the United States, most industrial distributors sit solidly in the small business category.

I, too, work for a small business. In fact, Industrial Distribution’s publisher has only 15 full-time employees which means we know each other’s kids and the way everyone takes their coffee. But it also means we each wear more hats than comfortably fit some days. And for many of us, we care a little more about the ins and outs than necessary because no one has ever put us in a silo.

I sometimes wonder if small businesses spend more time thinking about their advantages or about their disadvantages. Let’s be honest: scale and cash make a lot of things easier, which is probably why we often hear distributors telling us why they can’t or won’t compete in certain areas.

I recently enjoyed a lively interview with Mark Dancer, Founder of the Network for Channel Innovation who happens to also be the Fellow for the NAW Institute for Distribution Excellence.

Dancer spent 30+ years as a consultant to the industry but his most recent endeavor was as author of Innovate to Dominate: The 12th Edition in the Facing the Forces of Change Series, published on behalf of NAW.

The book is designed to serve as a roadmap for distributors looking to embrace innovation, but one of its key objectives is also reframing the way they look at the term altogether. And in speaking with Dancer, we both agreed that small distributors often find innovation to be the last on their very long to-do lists. But the excuse that often accompanies the reason businesses don’t explore things like automation, AI, e-commerce or data analytics comes down to their size: These things are “not for us.”

Dancer, it seems, would disagree and points to small distributors as having the kind of advantage they don’t often acknowledge. In other markets, he says, small companies are the disruptive ones.

“I think that there's this self-identity that smaller distributors fall into,” he explains. “Because we're family owned businesses, we think of ourselves as laggards. We're not innovators; we tend to be more about continuous improvement, slow-and-steady... but it's the small companies in any industry that aren't really encumbered by being a large, bureaucratic organization that has to meet the demands of investors.”

In short, small companies should be a breeding ground for experimentation because of their size, not in spite of it. These are the companies that can and should be exploring ways to bring innovation into their organizations. The urgency for distributors to adapt or die has been ramping up quickly and for those who want to make gains, Dancer says, “they need to think like a startup.”

If someone told you to start “thinking like a startup,” what would that mean? It’s a big question, and one your workforce in its entirety might love to chew on. You know, the ones that aren’t encumbered by silos, and don’t have someone telling them not to worry about “that” side of the business. What you might find is a roomful of ideas, the execution of which relies upon a nimble business environment. And if flexibility is all that's standing in the way of leveraging a competitive advantage, then it's time to decide how you can go from being a laggard, to thinking like a startup. 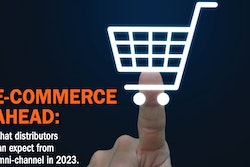