In this first online segment, we focus specifically on demographics, which establishes a profile of survey respondents based on company size, years in business, sales volume and product line. 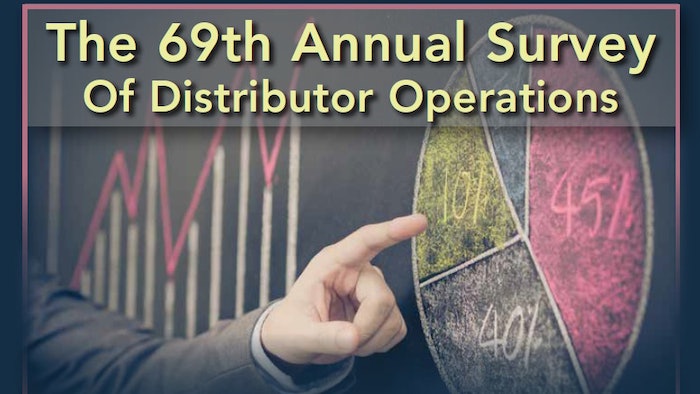 In this first online segment, we focus specifically on Demographics, which establishes a profile of survey respondents based on company size, years in business, sales volume and product line.

As expected, the vast majority of our Survey of Distributor Operations respondents are MRO products distributors. Nearly 83 percent say they sell to the manufacturing/ processing market, just a hair lower than last year. Construction is again the second-largest market, up less than a percentage point from 2015 at 63.6 percent, while at 60.2 percent, the share of OEM market sellers was third-largest and down two percentage points from a year ago. Machine shops, energy and utilities market sellers each represented between 50 and 58 percent of respondents, all within a point or two of last year, while government market sellers had a notable decline of nearly six points.

Altogether, the market demographics of our survey respondents vary little year-to-year, as was the story again for the 2016 version. That’s largely because a considerable amount of respondents has similar attributes in longevity, ownership. Fifty-seven percent had 2015 sales of less than $50 million and 47 percent have been in business 50 years or longer.

Perhaps the first sign of the ongoing industrial recession shows up when respondents are asked how the number of product lines they carry fares compared to last year (Figure 2). The segment that said product lines expanded dropped more than 10 percentage points to 55.3 percent, while the amount that have contracted product lines increased approximately 3.5 points to 5.3 percent. This is against the notion of distributors expanding their offerings to create a one-stop-shop.

As expected based on the market segment responses, the most popular product category was MRO supplies (49.7 percent), followed by safety (47.6 percent), hand tools (45.6 percent), adhesives & sealants (43.5 percent) and cutting tools (42.1 percent). Each of those were within two points of 2015. A few categories that had notable changes from a year ago included pumps (+7 percent) motors, controls & drives (-6 percent) hoses, reels & cords (-5 percent) and pneumatics (-5 percent).