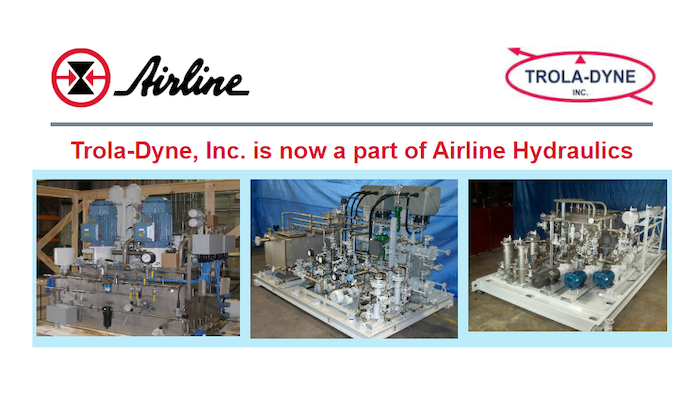 BENSALEM, PA — Airline Hydraulics (Airline) on Wednesday announced the acquisition of Trola-Dyne, Inc., a privately-owned company in business since 1972.

Trola-Dyne is located in York, PA, (across from Airline’s Interchange Place facility) and specializes in engineering, designing and building API 614-compliant and industrial lubrication systems, seal gas systems and other fluid and gas handling systems.

This acquisition will expand Airline’s offering to its customers in the oil and gas, refining, petrochemical, mining and power generation industries, among others.

Willard (Will) Macfarland, president of Trola-Dyne, will take on the role of general manager, and Trola-Dyne’s employees will continue in their positions with the company.

Commenting on the acquisition, Airline CEO Mark Steffens said, “We are so pleased to be joining forces with Will and the great team at Trola-Dyne. After being our neighbors in York for the past 15 years, we have decided to bring the power of our two great companies together. With Trola-Dyne’s industry expertise and tremendous customer synergies, we see a bright future for the combined entities. Additionally, this acquisition reinforces our commitment to the York community, of which we have been a member for over 35 years. Stay tuned for more great things.”

Trola-Dyne's Macfarland added, “We are delighted to be a part of the Airline team and look forward to passing on the benefits of Airline’s broad product portfolio, engineered systems offering, and strong customer support capabilities to our customers.”

Airline Hydraulics Corporation is a value-added distributor of fluid power, automation and machine safeguarding products from manufacturers including Bosch Rexroth, Eaton, HYDAC, SKF/Lincoln, SMC, Omron, Phoenix Contact and many others. Airline provides components and custom- engineered technology solutions, offering system engineering, manufacturing, service, repair and installation. In business since 1949, Airline is ISO 9001:2015-certified and has offices located throughout the Mid-Atlantic and New England regions of the US.