Over the past 12 months, prices at the wholesale level are up a record 7.8% 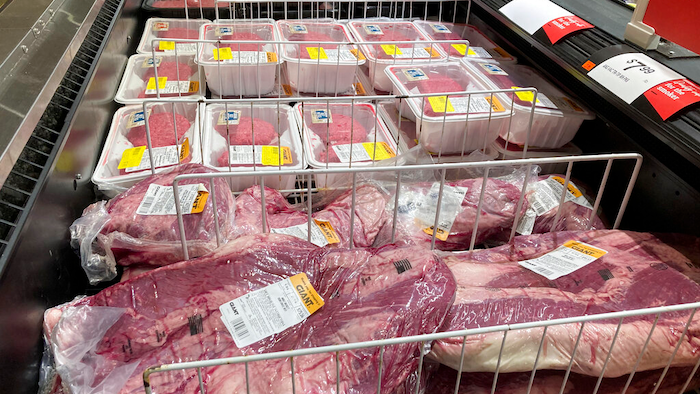 Meat products are displayed for sale at a grocery store in Roslyn, PA on June 15.
AP Photo/Matt Rourke

WASHINGTON (AP) — Inflation at the wholesale level jumped a higher-than-expected 1% in July, matching the rise from the previous month, and dimming hopes that the upward trajectory of prices would begin to slow.

Prices at the wholesale level over the past 12 months are up a record 7.8%, the largest increase in that span of time in a series going back to 2010.

And the back-to-back monthly increases in the producer price index, which measures price pressures before they reach consumers, were the most sizeable since a 1.2% rise in January, the Labor Department reported Thursday.

The latest data on rising producer prices comes a day after the U.S. reported that there was some evidence of slowing in price hikes at the retail level. Consumer prices in July rose 0.5%, compared with a 0.9% jump in June. Over the past year retail prices are up a notable 5.4%, the same 12-month gain posted in June with both months recording the largest annual gain since 2008.

July's 1% wholesale price uptick exceeded the 0.6% gain many economists had expected and signaled the price surge that has lifted the cost of everything from airline tickets and hotels to food and gasoline, has pushed prices well above the 2% target for annual gains set by the Federal Reserve.

Core inflation at the wholesale level, which excludes volatile food and energy costs, also rose 1% in July. Core prices over the past 12 months are up 6.2%.

“Price metrics continue to be impacted by pandemic-related effects including strong demand and supply constraints,” said Rubeela Farooqi, chief U.S. economist at High Frequency Economics. “The reopening impact should diminish over coming months but there is less certainty about supply dislocations, which could be exacerbated due to spread of the delta variant.”

Nearly three-fourths of the 1% July increase in wholesale prices were generated by the rising cost of services, which rose 1.1%. There were hefty gains in margins for autos and auto parts, which jumped 11.2%. Retail prices for new cars and used cars have been rising sharply in recent months as a computer chip shortage shuts down auto plants.

The price of goods at the wholesale level rose 0.6%, led by a 2.6% increase in energy prices, the biggest energy gain since a 5% increase in March.