The Postal Service has named The Workhorse Group, which pairs a delivery truck with a "Horsefly" drone, a finalist for an upcoming vehicle contract amid reports that the service's current fleet is nearing the end of its shelf life. 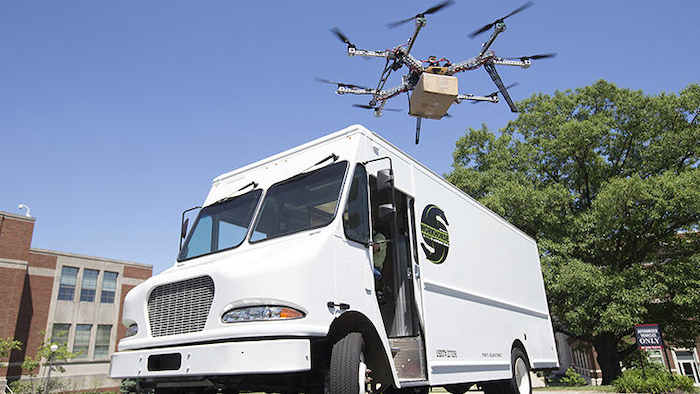 The U.S. Postal Service could be looking to add drones to its delivery fleet in coming years.

USPS officials recently named finalists for an upcoming vehicle contract amid reports that the agency's current fleet is nearing the end of its shelf life.

Reports indicate the Postal Service could use the Workhorse electric delivery truck, which also serves as a docking station for the company's HorseFly drones.

The drones, developed through a partnership with the University of Cincinnati, would deliver packages along a mail carrier's normal street route. Docking on the delivery trucks would eliminate the need for the unmanned vehicles to fly dozens of miles.

Instead, the Horsefly would carry packages shorter distances at about 35 miles per hour. The electric trucks themselves have a range of between 50 and 100 miles.

Workhorse officials believe drone technology would save the Postal Service time and money, while the trucks would eventually result in savings due to lower maintenance costs.

"We feel very confident that our integrated drone technology on top of our electric truck is the best solution for the Postal Service as well as giving them the lowest total cost of ownership," Duane Hughes, Workhorse Group's sales director, told USA Today.

The USPS plans to issue a request for proposals from the finalists next month, then award contracts to build prototype vehicles. The final selection for the potentially $4.5 billion contract would take place in 2017, with vehicle use beginning the following year.

The Postal Service becomes just the latest parcel delivery service to examine drone technology. Amazon.com hopes its Prime Air program will eventually allow drones to quickly ship packages of up to five pounds across distances of more than 10 miles.

The company recently received a waiver from the Federal Aviation Administration to test its Prime Air drones. The FAA expects that final regulations of drones for commercial use, however, won't be completed until 2017 at the earliest.