It was less than 18 months ago that MSC Industrial Direct made one of the biggest acquisitions in its history, acquiring Barnes Distribution North America (BDNA). Now MSC is re-branding BDNA to integrate the company, while still retaining its own identity. 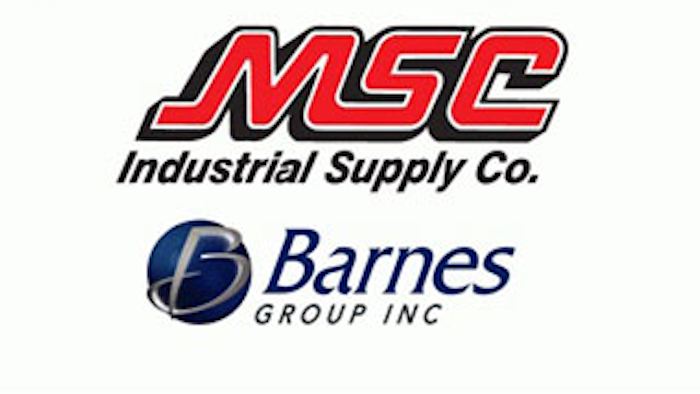 It was less than 18 months ago that MSC Industrial Direct made one of the biggest acquisitions in its history, acquiring Barnes Distribution North America (BDNA). This move allowed MSC to expand further into Canada, extend its inventory management solutions and add additional product offerings.

Since that acquisition, MSC has taken a series of steps to integrate BDNA into its company by announcing that BDNA’s former Cleveland headquarters would close, MSC’s corporate headquarters would be re-located to North Carolina and the company would save millions of dollars through synergistic opportunities and lowered costs.

Now MSC is re-branding BDNA by renaming it Class C Solutions Group — or CCSG, as it is to be known. MSC made the announcement as it released its fiscal third quarter earnings statement.

“We took one step in integrating the company under the MSC family while still retaining its own identity,” said Erik Gershwind, CEO and President of MSC during a conference call with financial analysts. “To summarize CCSG, we achieved our 2014 financial and operating targets without the benefit of any topline growth to speak of. At the same time, we’re making significant improvements that will result in future revenue growth and given the high incremental margins inherent in the model, we’re very encouraged about the prospects for future growth in both revenues and earnings,” he said.

“While recent topline performance has been nothing to write home about yet, as I look to the future the outlook for CCSG is even more promising than it was a year ago,” he said, according to a transcript of the call as provided by www.seekingalpha.com . “This past quarter we saw the U.S. business return to slight growth while currency and market weakness in Canada remained challenging and yielded contraction, netting out in total to a slight decline. As it relates to the integration plan, synergy realization, and the achievement of our EPS accretion targets, though, we’re right on track.”

MSC has been extremely busy as it undertakes a series of steps to drive sales and reduce costs.

MSC has closed three distribution centers and is on track to close the Cleveland headquarters this summer. It began moving the first wave of associates to its new Davidson, NC headquarters at the end of June.

The company is also constructing its fifth distribution customer fulfillment center in Columbus, OH, a process that is substantially complete.  MSC expects to begin shipping products from the center this fall.

Gershwind noted several other steps that are underway.

MSC continues to invest heavily in e-commerce, a move that is paying off. Excluding CCSG, e-commerce reached 48.9 percent of sales for the third quarter, as compared to 44.1 percent a year ago and 47.6 percent the previous quarter.

“We’re quite pleased with the recent and ongoing improvements to our website and are getting strong confirmation from our customers. Mscdirect.com remains an important part of our value proposition,” Gershwind said.

In addition, the company is adding employees to its sales force. In the last nine months, MSC has hired 65 salespeople, 25 of them in the last quarter alone.

The company added 35,000 SKUs to its web offering in the third quarter and now has approximately 795,000 SKUs available on mscdirect.com. “That brings our total SKU additions to 120,000 for our year-to-date, and we remain on track to add a total of roughly 150,000 for the fiscal year. As those newly added SKUs mature over time, so will their contribution to growth,” Gershwind said.

He also reiterated what he has said in several recent calls with analysts, emphasizing that M&A will be an important part of the company’s strategic plan.

“One of the primary places that we would put (acquisitions) to use is product line adjacencies outside of metal working. You saw us do it once with class C products with the Barnes acquisition, which is now CCSG. As each quarter passes and we like our execution and we’re getting CCSG under our belts, our confidence grows. I think seeing a continuous path to use M&A as a product adjacency move certainly makes sense,” he added.