About eight weeks after announcing it would form a combined holding company with two other firms, Lawson Products reported its 2021 fourth quarter and full year financial results on Feb. 24.

The results showed continued year-over-year sales growth for the MRO products distributor and a narrow net loss due to the inclusion of non-operating assets.

For the full year, Lawson had 2021 total sales of $417.7 million, up 18.8 percent vs. 2020. The company's Q3 2020 acquisition of Partsmaster accounted for $57.8 million of those sales. Excluding Partsmaster, Lawson's 2021 organic sales jumped 9.4 percent. The company said that the slowly improving industrial environment vs. 2020 led to increased sales in all customer categories in the Lawson segment.

Lawson's 2021 gross profit improved 17.5 percent vs. 2020, though margin of 52.5 percent trailed 2020's 53.1 percent. The company said the lower 2021 gross margin was driven by establishing inventory reserves related to integrating Partsmaster, along with growing reserves of PPE inventory. Gross margin improved sequentially in both Q3 and Q4.

Lawson ended 2021 by announcing a merger with companies of private equity firm LKCM Headwater — TestEquity and Gexpro Services. All three niche industrial distribution companies will be brought under a holding company with all three companies operating independently with their existing management teams as separate divisions. The combination is expected to close during Q2. 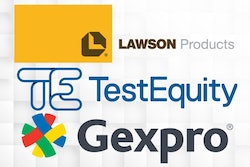