How Much Do Fantasy Football And Other Timewasters Cost Employers?

With fantasy football, social media and other timewasters more popular than ever, let's take a look at how much money employers are actually losing because of them. 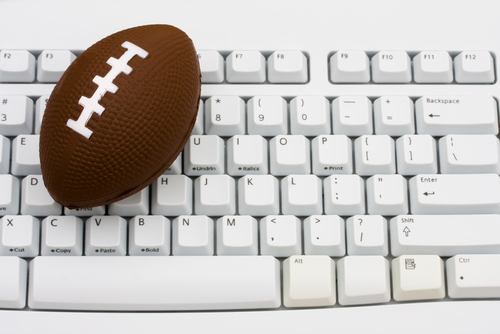 Last year nearly 26 million people in the United States played fantasy football, according to the Fantasy Sports Trade Association (FSTA). That number figures to be even higher in 2014 for a virtual game that is no longer just a hobby — it’s a mega-revenue generating business. The FSTA reported that $1.67 billion was spent on fantasy football in 2012.
But what’s far more stunning is the impact the game has in the workplace. A recent article by the Chicago Tribune’s Alexia Elejalde-Ruiz found that fantasy football is costing employers a whopping $13.4 billion in lost productivity, based on a study by number-crunching outplacement consultancy Challenger, Gray & Christmas.
That number dwarfs the firm’s findings of $6.5 billion for the 2012 season.
With the majority of those 26 million fantasy footballers congregating in person or online for their league draft between Friday and the NFL’s regular season-opener on Sept. 4, now is a good time to re-examine the impact that fantasy sports, as well as social media timewasters, have on the workplace.
Most employers have no issue with employees participating in fantasy sports, and so many wouldn’t if it weren’t so entertaining. But it’s when that entertainment is had during work hours that productivity drops. The firm’s fantasy football findings came after plugging in numbers for workers on nonfarm payrolls and assuming that each employee spends two hours per week on fantasy sports while on the job. Those two hours come from tinkering with setting lineups, viewing/researching stats, as well as fantasy football water cooler talk with other employees.
According to CGC CEO John A. Challenger, fantasy football is hardly the only timewaster in the workplace.
"We are not trying to demonize fantasy football,” Challenger said in a statement, per Elejalde-Ruiz. “It is important to understand that there are more distractions than ever in today’s workplace. If it’s not fantasy football, it’s the latest Hollywood gossip, shopping on Amazon or checking Facebook."
FSTA found that football is fantasy sports players’ favorite fantasy sport more than 69 percent of the time. With most leagues having 15-week seasons, plenty of company hours will be wasted on it from now through the end of December.
There are sports-specific time-wasters year-round. Fantasy football occupies September through December. College basketball is the culprit in March, as CGC found that an estimated 50 million Americans participate in March Madness office pools, with companies standing to lose $1.2 billion for every unproductive work hour during the first week of the NCAA Division I NCAA Tournament. Earlier this summer, it was the World Cup. Several games for the U.S. Men’s team took place during work hours, resulting in millions of Americans streaming the game at work either on office computers or smart phones, or just taking the day off altogether.
Again, that’s just for sports. Non-sports-related timewasters are much more abundant and widely used across the nation. A recent survey by CareerBuilder included a sample of 2,138 hiring managers and human resource professionals, as well as 3,022 full-time, private sector workers across industries and company sizes to find out what causes workers to waste the most time at the office. You can view the infographic here.
According to CareerBuilder, 24 percent of workers surveyed admitted that they spend at least one work hour on personal calls, emails or texts, while 21 percent say they spend at least an hour Internet-browsing.
CareerBuilder found that those surveyed said three of the four biggest workplace timewasters are technology-related:
The majority of jobs nowadays are done at a computer, and the vast majority of office computers have Internet, where distractions are everywhere. Those not working at a computer can easily access the same material on their smartphones. Thus, spending work hours at those distractions is inevitable. Fantasy sports and office pools can actually be a positive distraction. They help morale, help comradery. The workplace could actually be a worse without timewasters.
“An across-the-board ban on all fantasy football or sports websites is likely to backfire and cause a drop in morale, loyalty and, ironically, productivity,” Challenger said. “The end result could be far worse than any loss of productivity caused by an hour or two of team management each week.”
How big of an issue is fantasy football or other timewasters at your workplace?
Latest in Operations