Arguments in favor of the move also cite benefits for the overall economy. 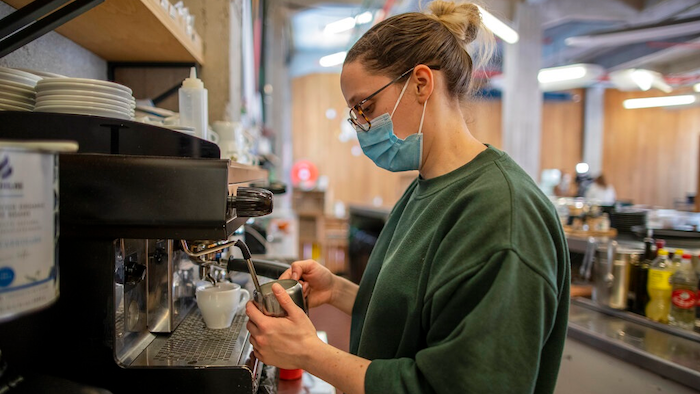 Waiter Sara Palacios prepares a coffee as she works at La Francachela restaurant in Madrid, Spain, Friday, March 26, 2021. Experimenting with cutting back one workday per week is about to go nationwide in Spain. A 3-year pilot project will be using 50 million euros ($59 million) from the European Union's massive coronavirus recovery fund to compensate companies as they resize their workforce or reorganize production workflows to adapt to a 32-hour working week.
AP Photo/Manu Fernandez

MADRID (AP) — After years of waiting tables, Danae De Vries is one step closer to achieving her lifetime dream of becoming a theater coach.

Ironically, she owes that to the pandemic. It was after last year's brutal lockdown that shut the Spanish economy down for weeks that the owners of a small restaurant chain in Madrid offered De Vries to cut her weekly work schedule by one day.

Already struggling to make ends meet in a city that has seen rental prices spiral, the 28-year-old was hesitant at first — and then enthusiastic when she was told her wages would remain untouched.

“Now I have time to work, to see my family and friends, and to find enough time to study,” she said. “It’s marvelous to have time, to not rush everywhere and find a bit of inner peace.”

A happier and more motivated De Vries is also better for her boss María Álvarez, the entrepreneur who turned her two-restaurant business upside-down when she proposed rotational four-day week shifts. Álvarez, a mother of two toddlers, and her startup partner at La Francachela had both struggled to keep the business going with no childcare support.

“There was a feeling that society had turned its back on families, that we had been betrayed,” explained Álvarez. “As business owners, we had to come up with some solutions for our businesses, our employees and also for our personal lives.”

Experimenting with cutting back one workday per week is about to go nationwide in Spain — the first country in Europe to do so. A three-year pilot project will be using 50 million euros ($59 million) from the European Union’s massive coronavirus recovery fund to compensate some 200 mid-size companies as they resize their workforce or reorganize production workflows to adapt to a 32-hour working week.

The funds will go to subsidizing all of the employers’ extra costs in the first year of the trial and then reduce the government’s aid to 50% and 25% each consecutive year, according to a blueprint by the Más País progressive party that's behind the initiative.

The only condition is that the readjustment leads to a real net reduction of working hours while maintaining full-time contract salaries, explained Héctor Tejero, a lawmaker with Más País in the Madrid regional assembly.

“It’s not using the European funds for Spaniards to work less, it’s about seeing how we can improve productivity and competitiveness of our companies,” said Tejero.

Arguments in favor of the move also cite benefits for the overall economy. A mass shift to a three-day weekend would lead to more consumption, especially in entertainment and tourism, a backbone of the Spanish economy.

Reducing work hours from 40 to 35 per week in 2017 would have resulted in a 1.5% GDP growth and 560,000 new jobs, a study published earlier this year in the Cambridge Journal of Economics found. Salaries would have also increased nationally by 3.7%, especially benefitting women who more often take part-time jobs, the research said.

Software Delsol, in southern Spain, invested 400,000 euros last year to reduce working hours for its 190 employees and has since then reported a 28% reduction in absenteeism, with people choosing to go to the bank or see their doctor on their weekday off. Their sales increased last year by 20% and no single employee has quit since the new schedule was adopted.

Critics say that a pandemic-shaken economy is not the best scenario for experiments. With a 10.8% GDP contraction last year, its worst since the 1930s Civil War, Spain has suffered from intermittent lockdowns and the near-total freeze in international travel. Some experts argue that the priority should instead be fixing the country's dysfunctional labor market, which is dragging one of Europe's highest unemployment rates and is marred by precarious, low-wage jobs.

ESADE Business School's Carlos Victoria also warned against the one-size-fits-all approach of the proposal. “There are probably industries or economic areas in which a reduction of working hours won't necessarily lead to productivity gains," the economic policy researcher said.

But Más País argues that it's best to try first and decide later how to scale it up — or whether to do it at all.

Still, not all unions are fully backing the plan, conservatives have been defensive and CEOE, the main Spanish business association, has so far offered a lukewarm response to the project.

Nevertheless, at least half a dozen companies have already reached out expressing interest, according to Tejero, who said the pilot won’t be launched at least until September, when and if mass vaccination helps revive the economy.

“In Spain, we have moved from presenteeism, where people had to be at the office for a very long time, to be in front of the computer, at home, for an even longer time,” said La Francachela's Álvarez. “People are increasingly angry because remote working in itself is not going to solve our problems from a broader perspective.”