Seattle’s Minimum Wage — The Next Chapter

Last week, the Seattle City Council unanimously passed an ordinance that gave the city the highest minimum wage in the nation — $15 per hour. Now the first lawsuit against the new minimum wage in Seattle has been filed. 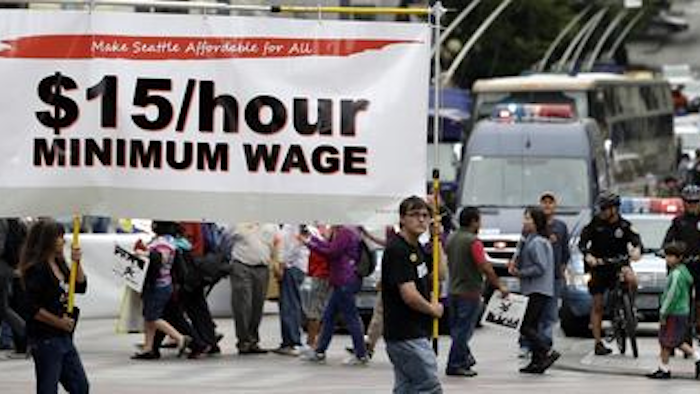 Last week Manufacturing Business Technology reported on the Seattle City Council unanimously passing an ordinance that gave the city the highest minimum wage in the nation — $15 per hour. The new ordinance is designed to phase in the new minimum wage over several years, with a slower process for small businesses. The plan gives businesses with more than 500 employees nationally at least three years to phase in the increase. Those providing health insurance will have four years to complete the move. Smaller organizations will be given seven years.

Now the first lawsuit against the new minimum wage in Seattle has been filed.

The AP reported that in a lawsuit filed in U.S. District Court in Seattle by the International Franchise Association (IFA), a Washington, D.C.-based business group, said the ordinance "unfairly and irrationally discriminates against interstate commerce generally, and small businesses that operate under the franchise business model specifically."

An IFA press release alleges that the ordinance violates the Equal Protection Clause of the U.S. Constitution by arbitrarily discriminating against small businesses simply because they are franchises. For example, a non-franchise company with 450 workers is categorized as a small employer and gets extra time to comply with the law. But a franchisee with just five employees is considered a large employer — and gets less time to raise its wage floor — if its franchise network employs more than 500 workers nationwide.

“Hundreds of small, locally-owned businesses and thousands of their employees are unfairly threatened by Seattle’s new law. We are not seeking special treatment for franchisees, we are just seeking equal treatment. The city’s minimum wage statute arbitrarily and illegally discriminates against franchisees and significantly increases their labor costs in ways that will harm their businesses, employees, consumers and Seattle’s economy,” said Steve Caldeira, IFA president & CEO. “We hope the court will block the ordinance to save jobs and prevent Seattle from unfairly singling out one type of business — a franchise — for punitive treatment.”

The implications here go beyond franchises. Companies, large and small, with multiple locations could be affected by this new minimum wage requirements if they hit the magic number of employees and have an office or location in Seattle.

“A single hotel or restaurant can be treated as if it employs more than 500 people even when it actually employs only 15 people,” said Paul D. Clement, a partner at the law firm Bancroft PLLC and a former U.S. Solicitor General.

Learn more about the issue and coalition of Seattle small business owners at SeattleFranchiseFairness.com.

So what do you think? Was this requirement just an oversight when drafting the new ordinance? Is Seattle being unfair? What if this was happening in your city — how would that potential affect your company? Leave your comments below.