U.S. labor official Thomas Perez told the two sides Thursday night that if they don't reach an agreement by Friday, they'll have to leave California and negotiate in Washington.

LOS ANGELES (AP) — The nation's top labor official ratcheted up pressure on the two sides haggling over a new contract for dockworkers at West Coast seaports, telling them if they don't reach an agreement by Friday, they'll have to leave California and negotiate in Washington.

Secretary of Labor Thomas Perez gave that deadline Thursday to leaders of the dockworkers' union and a maritime association representing their employers.

Should the two sides not succeed, Perez said he will haul their leaders to the nation's capital next week, according to Oakland Mayor Libby Schaaf, who learned about the deadline in an evening call Perez had with mayors of major West Coast port cities.

Shifting the stage to "the shadow of the White House will place immense pressure on these parties to resolve an issue that is being underscored as being of national importance," Schaaf said.

Perez's office did not have immediate comment Thursday night. Neither did the bargaining parties, which are operating under a media blackout.

The talks in San Francisco began nine months ago, but broke down in recent weeks. Perez began overseeing negotiations Tuesday.

Since his arrival, the two sides appear more engaged than before. On Thursday, talks extended into the evening.

Meanwhile, billions of dollars of cargo sits on ships anchored outside the 29 ports. They cannot dock because of historically bad cargo bottlenecks at ports that handle about $1 trillion of trade annually, much of it with Asia.

Cargo already was moving slowly due to systemic problems in the supply chain. Starting this fall though, problems reached crisis levels, due both to dockworkers who slowed their work rate to comply fully with safety rules and partial worker lockouts by companies that load and unload ships.

Though the economic impact has been hardest on specific industries — U.S. produce and meat exporters, for example, and smaller importers of consumer goods — no less than Wal-Mart Stores Inc. warned Thursday that congestion at the ports could affect selection in the retail giant's stores.

From the start of his involvement, Perez stressed the urgency of resolving the big remaining difference whether to change the arbitration system that dockworkers and companies use to resolve workplace conflicts. Standard contract issues such as health care and wages are not a stumbling block.

"Every day that goes by without a resolution only adds to the economic pain for the West Coast and the entire country. This cannot continue," California's two Democratic U.S. senators, Barbara Boxer and Dianne Feinstein, wrote to the leaders of the International Longshore and Warehouse Union and the Pacific Maritime Association of employers. The association represents companies that own, load and unload massive ocean-going ships. 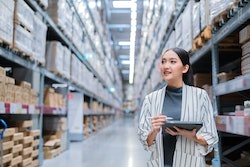