The central bank said it will keep its rate there until it is “confident that the economy has weathered recent events." 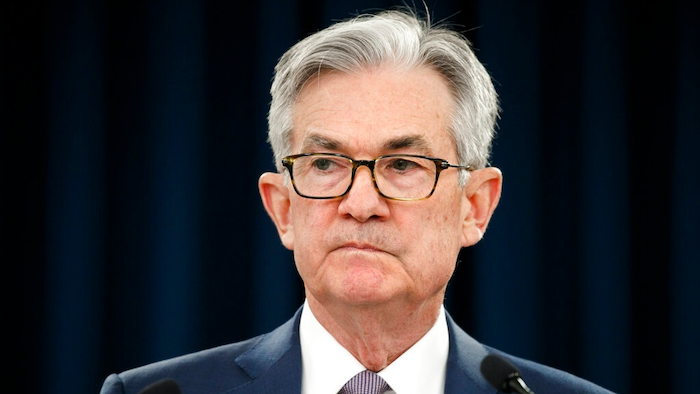 Federal Reserve Chair Jerome Powell pauses during a news conference, Tuesday, March 3, 2020, while discussing an announcement from the Federal Open Market Committee, in Washington. In a surprise move, the Federal Reserve cut its benchmark interest rate by a sizable half-percentage point in an effort to support the economy in the face of the spreading coronavirus. Chairman Jerome Powell noted that the coronavirus "poses evolving risks to economic activity."
AP Photo/Jacquelyn Martin

WASHINGTON (AP) — The Federal Reserve took massive emergency action Sunday to try to help the economy withstand the coronavirus by slashing its benchmark interest rate to near zero and saying it would buy $700 billion in Treasury and mortgage bonds.

The Fed’s surprise announcement signaled its rising concern that the viral outbreak will depress economic growth in coming months, likely causing a recession, and that it's poised to do whatever it can to counter the risks. It cut its key rate by a full percentage point to a range between zero and 0.25%.

The central bank said it will keep its rate there until it is “confident that the economy has weathered recent events."

The Fed will buy at least $500 billion of Treasury securities and at least $200 billion of mortgage-backed securities. This amounts to an effort to ease market disruptions that have made it harder for banks and large investors to sell Treasuries as well as to keep longer-term borrowing rates down.

All told, the Fed's aggressive actions are intended to keep financial markets functioning and lending flowing to businesses and consumers. Otherwise, as revenue dries up for countless small businesses that have suddenly lost customers, these employers could be forced to lay off workers or even seek bankruptcy protection in some cases.

“This is a break-the-glass moment" for the Fed, said Mark Zandi, chief economist at Moody’s Analytics. “They are throwing everything they’ve got at this. My sense is they must be nervous about the credit system not functioning properly. They are trying to shore up confidence.”

By slashing its benchmark short-term rate and pumping hundreds of billions of dollars into the financial system, the Fed’s moves Sunday recalled the emergency action it took at the height of the financial crisis. Starting in 2008, the Fed cut its key rate to near zero and kept it there for seven years. The central bank has now returned that rate — which influences many consumer and business loans — to its record-low level.

The new bond purchases will be similar to the several rounds of “quantitative easing,” or QE, that the Fed conducted during and after the Great Recession to bolster the financial system and the economy. Chairman Jerome Powell, in a conference call with reporters, said the Fed's purchases are intended to ensure that credit markets function properly.

Shoring up the Treasury bond market and other sources of credit, Powell added, is vital to the health of the economy.

Powell warned that the economy would likely shrink in the April-June quarter because of the widespread shutdowns from the coronavirus and a broad pullback in consumer spending. He noted that the necessary behavioral changes being made across the country to stem the outbreak — an avoidance of travel, shopping and mass gatherings — are inherently harmful to the economy, which he said had been in solid shape before the virus hit.

“Ultimately, the virus will run its course and the U.S. economy will resume a normal level of activity,” Powell said, though he didn't speculate on when the rebound might occur.

“The virus is having a profound effect on the people of the United States and across the world," Powell said. The primary response will need to come from health care providers, he stressed, as many experts have.

Still, he added that "economic policymakers must do what we can to ease hardship caused by disruptions to the economy, and support a swift return to normal once they've passed."

Powell acknowledged a concern sounded by many economists in recent weeks: That the Fed, the European Central Bank and other leading central banks have only a limited ability to ease the economic damage caused by the virus. The chairman said that Congress and the White House would also have to use tax and spending policies to boost the economy.

“We don't have the tools to reach individuals and particularly small businesses,” he said on the conference call. “But this is a multi-faceted problem, and it requires answers from different parts of the government and society.”

A statement from the Federal Reserve Bank of New York noted that the central bank's new Treasury purchases will begin with $40 billion on Monday, while the mortgage bond purchases will total roughly $80 billion over the next month.

“We're going to go in strong, starting tomorrow, Powell said, “and ... do what we need to do to restore market function.”

The Fed is also joining in a coordinated global action, with the the Bank of Canada, the Bank of England, the Bank of Japan, the European Central Bank and the Swiss National Bank, to provide cheap dollar credit to banks. This move is intended to ensure that foreign banks continue to have access to dollars that they lend to overseas companies.

Powell said the Fed acted Sunday after having decided to meet this weekend in lieu of the meeting its policy committee had been scheduled to hold Tuesday and Wednesday this week. He also said the central bank decided not to issue its usual quarterly projections for the economy and interest rates this week because the virus is altering the economic picture too quickly to make such projections useful.

U.S. stock futures began falling after the Fed's announcement. Futures for the S&P 500 index were down about 4.5%. Gold prices rose 3.5%.

Sunday's action drew rare praise from President Donald Trump, who had attacked the Fed as recently as Saturday, as he has frequently, for not acting quickly or aggressively enough.

“It make me very happy,” Trump said as he opened a White House briefing on the coronavirus. “I think that people and the markets should be very thrilled."

One dissenting Fed member, Loretta Mester, president of the Cleveland Federal Reserve, voted Sunday against the full-point rate cut, favoring a half-point cut instead. She did support the Fed's other actions to boost credit markets.

As more businesses across the country see their revenue dwindle as consumers stay home, many of them will seek short-term loans to maintain their payrolls. The Fed said it has dropped its normal requirement that banks hold cash equal to 10% of its customers' deposits, thereby allowing banks to lend that money instead. It also said banks can use additional cash buffers that were imposed after the 2008 financial crisis for lending.

“It confirms that the Fed sees the economy going down ... very sharply’’ toward recession, said Adam Posen, president of the Peterson Institute for International Economics, said.

Yet with the virus' spread causing a broad shutdown of economic activity in the United States, the Fed faces a hugely daunting task. Its tools — intended to ease borrowing rates, facilitate lending and boost confidence — are not ideally suited to offset a fear-driven shutdown in spending and traveling.

"This isn’t going to be the magic bullet that saves everything,’’ said Timothy Duy, an economist at the University of Oregon who follows the Fed, but sends a signal to Congress that the economy needs emergency stimulus.

Duy predicted that the Fed will follow up with further actions, including possibly changing its inflation target to allow for more stimulus and providing more support for commercial paper — the short-term notes that companies issue to meet expenses.

Earlier Sunday, Treasury Secretary Steven Mnuchin said that both the central bank and the federal government have tools at their disposal to support the economy.

Mnuchin also said he did not think the economy is yet in recession. Many leading economists, though, have said they believe a recession has either already arrived or will soon. JPMorgan Chase predicts the economy will shrink at a 2% annual rate in the current quarter and 3% in the April-June quarter.

Two weeks ago, in a surprise move, the Fed sought to offset the disease's drags on the economy by cutting its short-term rate by a half-percentage point — its first cut between policy meetings since the financial crisis.