For Major Shippers, 2019 Ended on a Sour Note

Trade wars and slowing growth trends are having an impact. 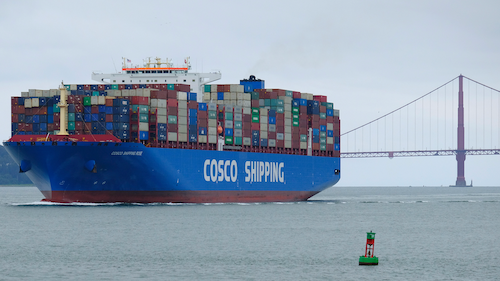 For major shipping companies dealing with trade wars and slowing global growth, conditions appear to have deteriorated as 2019 came to a close. Global shipping and logistics provider Expeditors International said Friday that it expects fourth quarter operating income to fall between $177 million and $183 million.

CEO Jeffrey Musser cited trade disputes and slowing growth for a number of economies. The report comes a day after the railroad CSX reported a seven percent decline in the freight it hauled during the final months of the year.

"We've seen impacts throughout the year from these market conditions, but the pace at which these changes occurred accelerated dramatically in the fourth quarter," Musser said. "We know this environment will change over time, as it has always has in the past." Shares of Expeditors International of Washington Inc. slumped five percent at the opening bell.

Transportation companies are the worst performers across the market in trading. Shares in trucking, railroad and ocean shipping companies are selling off.

JB Hunt Transport Services Inc., a trucking company, on Friday reported profits that fell well short of what industry analysts had expected, according to a survey by Zacks Investment Research. Shares in that company are down three percent. FedEx reported last month that its profit slid 40 percent, hurt by higher costs, a shorter holiday season and its move to cut ties with Amazon.com. It too, cut its profit expectations.