A quarterly survey by the National Association for Business Economics found that only 24 percent of companies increased wages and salaries in the July-September quarter, despite steady job gains. 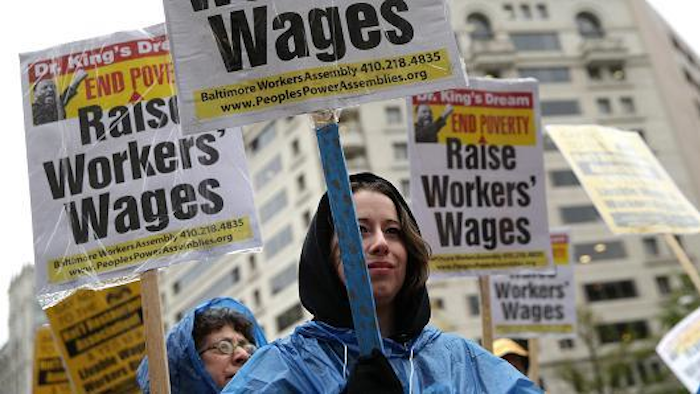 U.S. businesses were much less likely to boost pay in the third quarter than in previous months, even as hiring remained healthy, a sign that wage gains may remain weak in the coming months.

A quarterly survey by the National Association for Business Economics found that only 24 percent of companies increased wages and salaries in the July-September quarter. That's down from 43 percent in the April-June quarter and the first drop after three straight increases.

Yet the firms still added jobs at a healthy pace, which usually pushes wages higher as employers compete for workers. A measure of hiring in the survey dipped in the third quarter but remained near a three-year high. The figures suggest that the number of people out of work remains high enough that companies aren't under any pressure to raise pay.

And just one-third of respondents said they expect their companies will boost wages in the October-December quarter, about the same proportion as three months ago.

Despite healthy job gains this year, there were still 9.3 million people unemployed in September, according to government data. That's up from 7.6 million before the Great Recession. More than 7 million Americans are working part-time but are looking for full-time work, which gives employers an even larger pool of potential employees to choose from.

The NABE surveyed 76 of its member economists in late September. The economists work for companies or private trade associations.

Weaker sales and profits may have also made companies reluctant to boost pay. Just 49 percent of respondents said their company's sales rose in the third quarter, down from 57 percent in the second quarter and the smallest proportion in a year.

Profits also were squeezed, with 14 percent of firms reporting smaller profit margins. That was the largest proportion to do so in a year.

The survey's other findings included:

— More than three-quarters of economists surveyed expect the Federal Reserve will begin raising its benchmark short-term interest rate in the second quarter of 2015. Still, 84 percent said a small increase in rates in the short-term wouldn't hurt their businesses.

— Two-thirds of the firms said they are having no difficulty filling their open jobs, a good sign for hiring. Government data shows that job openings are at the highest level in nearly 14 years. Some economists worry that many of the unemployed don't have the skills needed for the jobs that are available. But the NABE survey suggests that companies are mostly able to fill their available jobs. That's also probably a reason that wages increases are less common. If companies were having more difficulty hiring workers, they might offer higher salaries.