Beijing said it will protect Chinese companies, but gave no details of possible retaliation. 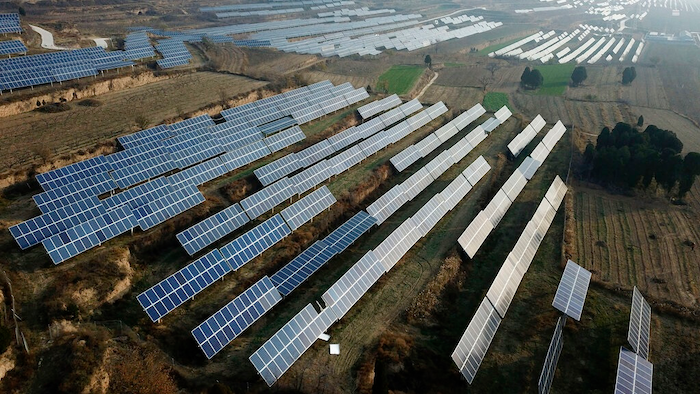 In this Nov. 28, 2019, file photo, a solar panel installation is seen in Ruicheng County in central China's Shanxi Province. China's government on Friday, June 25, 2021 criticized U.S. curbs on imports of solar panel materials that might be made with forced labor as an attack on its development and said Beijing will protect Chinese companies, but gave no details of possible retaliation.
AP Photo/Sam McNeil, File

BEIJING (AP) — China’s government on Friday criticized U.S. curbs on imports of solar panel materials that might be made with forced labor as an attack on its development and said Beijing will protect Chinese companies, but gave no details of possible retaliation.

The U.S. customs agency said Thursday it will block imports of polysilicon from Hoshine Silicon Industry Co., which might use forced labor as part of a Beijing campaign against ethnic minorities in the Xinjiang region in the northwest. Imports from six other Chinese suppliers of raw materials and components for solar panels also are to be restricted.

Washington is using “human rights as a disguise” to “suppress the industrial development of Xinjiang," said a Foreign Ministry spokesperson, Zhao Lijian.

“The United States doesn’t care at all about the Xinjiang people," Zhao said. “Their real plots and sinister intentions are to mess up Xinjiang to contain China.”

Chinese officials reject accusations of forced labor and other abuses against predominantly Muslim groups in Xinjiang. They say detention camps in which as many as 1 million people are held are for job training and to combat radicalism.

The U.S. move is a potential hurdle for President Joe Biden's ambition to promote solar power. Hoshine is one of the biggest global suppliers of polysilicon, a material used to make solar panels.

Zhao said Beijing will “take all necessary measures” to protect its companies but gave no details. Chinese spokespeople have made similar comments in response to earlier U.S. trade sanctions, usually followed by no official action.

The U.S. customs agency said an investigation found evidence that workers in the Xinjiang polysilicon industry were intimidated and threatened and their movement restricted.

Direct imports from Hoshine into the United States over the past 2 1/2 years totaled about $6 million while finished goods that include material from the company were about $150 million, according to the U.S. government.