The Fed also reiterated that it expects to keep its short-term benchmark interest rate near zero through at least 2023. 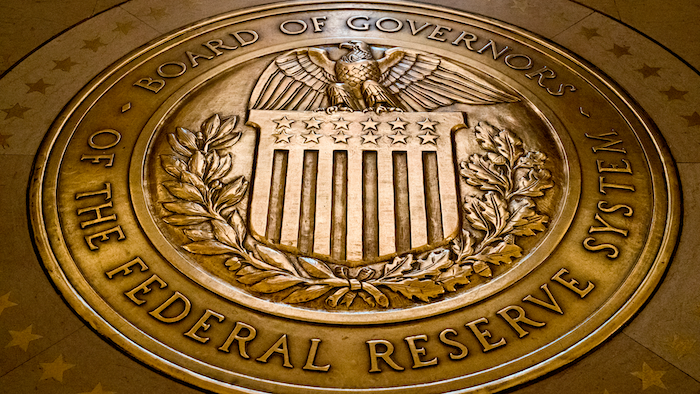 This Feb. 5, 2018 photo shows the seal of the Board of Governors of the United States Federal Reserve System in the ground at the Marriner S. Eccles Federal Reserve Board Building in Washington.
AP Photo/Andrew Harnik, File

The Fed also reiterated after its latest policy meeting that it expects to keep its benchmark short-term interest rate near zero through at least 2023. The Fed has kept its key rate there since March, when it took a range of extraordinary steps to fight the pandemic recession by keeping credit flowing.

Chair Jerome Powell said he and other Fed officials expect the economy to rebound at a healthy pace next year as viral vaccines become widely distributed. But the next three to six months will likely be painful for the unemployed and small businesses as pandemic cases spike, Powell said at a news conference.

In a statement and in Powell's answers to reporters, the Fed signaled that it's prepared to keep rates ultra-low for the long run to help the economy withstand those threats and sustain a recovery. Yet Powell also pointedly stressed the need for further rescue aid from Congress to ease the impact of increased apartment evictions and business failures, and he expressed optimism about the deal under consideration by Congress.

“The case for fiscal policy right now is very, very strong," Powell said, “and I think that is widely understood now. It's a very positive thing that we may finally be getting that."

Congressional leaders appear to be nearing agreement on a $900 billion relief package that would provide extended unemployment benefits, more loans for small businesses and possibly another round of stimulus checks for individual Americans.

The Fed's policymakers made just one notable change to the statement they issue after each meeting. On Wednesday, they said the central bank will continue to buy at least $80 billion of Treasurys and $40 billion of mortgage-backed securities a month “until substantial further progress has been made” toward the Fed's goals of maximum employment and stable prices.

Those purchases are intended to hold down longer-term rates, including borrowing costs for mortgages, auto loans and some business loans. Previously, the Fed had said only that the purchases would continue “over coming months.” The new guidance suggests that the bond buys will continue indefinitely.

Some economists faulted the phrasing as too evasive. More precise guidance might prevent financial markets from anticipating an end to the purchases before the Fed intends to reduce them.

"The Fed’s forward guidance is disappointingly vague,” Winograd said, and could lead investors to force up interest rates sooner than the Fed would prefer.

In quarterly economic projections that the policymakers issued Wednesday, they painted a brighter picture for next year. Their upgrades likely reflect the expected impact of new coronavirus vaccines. The officials now foresee the economy contracting 2.4% this year, less than the 3.7% decline it envisioned in September. For next year, in anticipation of a rebound, the officials have upgraded their growth forecast from 4% to 4.2%.

The Fed's latest policy statement coincides with an economy that is stumbling and might even shrink over the winter as the raging pandemic forces new business restrictions and keeps many consumers at home. Weighing the bleak short-term outlook and the brighter long-term picture has complicated the Fed's policymaking as it assesses how much more stimulus to pursue.

At his news conference, Powell acknowledged that challenge.

“The case numbers are so high and so widespread across the country ... this will have the effect of suppressing activity," he said, particularly in-person services such as eating out and traveling.

“At the same time, people are getting vaccinated, now," he added. “You have to think sometime in the middle of next year, you’ll see people comfortable going out and engaging in a broader range of activities.”

Recent economic reports have generally reflected a sharply slowing recovery. On Wednesday, the Commerce Department reported the sharpest drop in retail sales in seven months. Americans held back on spending in November at the start of the holiday shopping season, which typically accounts for a quarter or more of retailers' annual sales.

And last week, the number of people seeking unemployment aid rose for the third time in four weeks, evidence that companies are increasingly cutting jobs nine months since the erupted of the pandemic caused a deep recession.

Some economists had expected the Fed to announce a shift in its bond purchases by buying more longer-term bonds and fewer shorter-term securities — a step they could still take in future meetings.

Such a move would seek to deliver more immediate help for consumers and businesses. Buying more 10-year Treasurys, for example, lowers their yield, and the 10-year yield influences mortgage rates and other borrowing costs. Yields on two- or three-year bonds, by contrast, don’t affect many other rates. But the Fed may prefer to keep that step in reserve in the event that the economy significantly worsens next year.

Powell also addressed the Fed's decision Tuesday to join the Network of Central Banks and Supervisors for Greening the Financial System, an organization of 83 central banks and regulators that is considering how to gauge the risk climate change poses for banks' lending portfolios.

“Climate change is an emerging risk to financial institutions, the financial system and the economy,” Powell said. “And we are, as so many others are, in the very early stages of understanding what that means, what needs to be done about it and by whom.”