According to PwC’s study, the increase in average three-year ETR is due in part to an improved business climate and a decrease in companies reporting losses. In 2009, one in four companies in the study was in a loss making position; by 2012, the ratio was much smaller at one in 10. 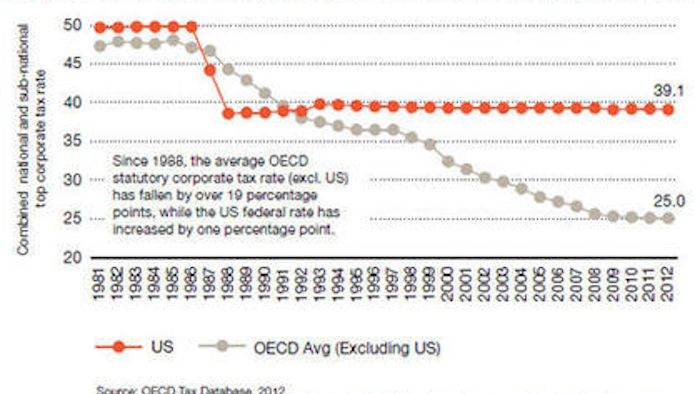 NEW YORK – There has been a steady upward trend in average effective tax rates (ETR) of industrial products and automotive companies from 2010 (26.1 percent) to 2012 (28.3 percent), despite a reduction in statutory rates of corporate income tax around the world, according to the PwC US 2013 Assessing tax report, a tax rate benchmarking study covering 316 companies across the following industries: aerospace and defense (A&D), automotive, chemicals, engineering and construction, industrial manufacturing and metals, and transportation and logistics.

According to PwC’s study, the increase in average three-year ETR is due in part to an improved business climate and a decrease in companies reporting losses. In 2009, one in four companies in the study was in a loss making position; by 2012, the ratio was much smaller at one in 10.  All told, 28 companies had tax losses in 2012, compared to 35 with tax losses in 2010. Looking at the broader picture, profits for the group of companies in the study increased six percent year-over-year. Drilling down by sector, the recovery has been uneven, with A&D, engineering and construction, and transportation and logistics all showing growth in profits, with chemicals and industrial manufacturing and metals producing the opposite trend.

“We have witnessed a steady increase in the global ETRs across the industrial products sector, as the recovery gains ground and companies continue to demonstrate improved profitability,” said Michael W. Burak, U.S. and global industrial products tax leader for PwC. “At the same time, we are seeing a consistently healthy level of investment spending, as companies seek to strengthen their competitive positions, while securing tax incentives that favorably impact ETRs compared to statutory rates. Further, with the globalization of commerce, management teams are facing an increasingly complex tax picture, fueling interest in comprehensive tax reform.  For multinational companies, understanding global tax policies is paramount for accessing expansion strategies and the related impact on investment returns.”

Looking across the PwC study group, tax incentives and credits remained the largest favorable driver of ETR in 2012, reported by 131 companies, resulting in a benefit of 3.3 percent in line with 2011.  Descriptions included the domestic manufacturing deduction, production-related deductions, research and development credits, and general business credits. The A&D sector had the largest number of companies benefiting from tax incentives in 2012, reducing the ETR by 4.1 percent. The impact of international operations was the second largest factor, with an average benefit of two percent to reporting companies, compared to 1.6 percent in 2011. The automotive sector had the greatest tax benefit from foreign operations, partly due to the profile of the industry, which has a number of Japanese and American companies where the statutory rate is the highest in the peer group.

A breakdown of PwC’s tax benchmarking analysis for the industrial products and automotive sectors in the study follows:

Aerospace and Defense – The A&D sector faced challenging conditions in 2012, primarily due to declining defense budgets, offset in part by a strong commercial aerospace market.  The sector generated an average three-year ETR of 27.9 percent in 2012. In the past three years, there has been a three point increase in the ETR for the group, rising to 29.3 percent in 2012 from 26.5 percent in 2010. Fueling the increase, sector profits rose 22.3 percent over 2011. The most favorable driver of ETR in 2012 was tax incentives, reported by 80 percent of companies in the study, and driving a 4.1 percent favorable impact on ETR.  Impact of foreign operations was also a major driver, resulting in a 1.2 percent decrease in ETR.

Automotive – The global automotive industry continued its strong recovery in 2012. The average ETR for the sector has been fairly constant over the past three years, at an average of 26.5 percent in 2012.  The impact of foreign operations has been greater than in other sectors, with a majority of companies reporting it as a favorable driver on their ETR, resulting in a benefit of 4.2 percent.  In particular, tax differentials on foreign earnings have been a significant catalyst in lowering companies’ tax liabilities. Tax incentives also contributed to lowering ETRs, by 1.4 percent, with companies claiming research and development credits, tax benefits and domestic manufacturing deductions.

Chemicals – In 2012, many chemical companies were affected by high fuel and raw material costs, combined with moderate U.S. growth and the European debt crisis.  By contrast, North America saw decreases in energy and raw material costs due to shale gas opportunities. There was also an increased focus on expansion in BRIC countries. The average ETR for the period between 2010 and 2012 was 27.1 percent.  Tax incentives lowered average ETRs by 3.5 percent, due to the domestic manufacturing and R&D activities.  Impact of foreign operations was also prevalent, lowering ETR by 2.5% percent.

Engineering and Construction – The engineering and construction industry experienced a modest recovery in 2012, due to underlying demand from improving consumer confidence, among other factors.  The average three-year ETR for the sector was 21.3 percent in 2012 and has remained fairly constant over three years.  Tax incentives resulted in a 4.2 percent reduction to ETR and have been a significant factor in driving down tax liabilities. Various other adjustments, including depletion, the effect of associates and net tax benefits of non-controlling interests' share of income, have also been contributing factors.

Industrial Manufacturing and Metals – Metals companies struggled globally in 2012 due to economic uncertainty, which resulted in soft pricing for both aluminum and steel. On the cost side, raw material costs, including energy, have been high and/or volatile, which have made managing costs difficult. The average three-year ETR for the industrial manufacturing and metals sector was 29.2 percent in 2012, representing the highest average ETR for all sectors. This is consistent with historical trends, due in part to sector-specific taxes that raise the ETR.  The most commonly reported favorable driver was the impact of foreign operations, which provided a 3.3 percent reduction to ETR. Tax incentives also had a noticeable effect on the ETR, causing a 2.5 percent decrease, including the impact of research and development credits.

Transportation and Logistics – In 2012, logistics companies saw continued price pressure. Challenges included volatile fuel prices and the need to enhance the speed of freight routes, particularly given growing freight requirements of online sales.  There were also significant challenges for airline and shipping groups.  The average three-year ETR was 29 percent in 2012, the second highest across the study group.  The most common reconciling item was the impact of foreign operations, which increased the ETR by 0.6 percent, while tax incentives drove a 4.0 percent reduction to ETR.

In addition to the tax benchmarking analysis, the PwC study includes a special report on comprehensive tax reform, including addressing multiple perspectives on the issue.  For a copy of PwC’s Assessing Tax, please visit: www.pwc.com/us/industrialproducts.

About PwC US
PwC US helps organizations and individuals create the value they're looking for.  We're a member of the PwC network of firms in 158 countries with more than 180,000 people.  We're committed to delivering quality in assurance, tax and advisory services.  Tell us what matters to you and find out more by visiting us at www.pwc.com/US.

© 2013 PricewaterhouseCoopers LLP, a Delaware limited liability partnership. All rights reserved. PwC refers to the US member firm, and may sometimes refer to the PwC network. Each member firm is a separate legal entity. Please see www.pwc.com/structure for further details.

This content is for general information purposes only, and should not be used as a substitute for consultation with professional advisors.