Amazon.com appears to be bolstering its delivery efforts both on the ground and in the sky — steps that could bring the e-commerce giant closer to the parcel delivery sector.

The trucks and drivers, however, would remain employed by third-party delivery companies, which would prevent the additional regulations and costs of registering as a commercial trucking operation.

Additional reports, meanwhile, said that Amazon is also considering launching its own air cargo service, potentially based in Ohio.

Those steps could draw the e-retailer into direct competition with FedEx, UPS and other parcel carriers.

Amazon was long considered likely to increase its internal shipping operations amid other efforts to control rising costs.

Although the company currently relies on contractors, analysts said that the future could see Amazon fulfilling that role for other companies.

"Will we eventually see Amazon cargo planes moving goods from New York to San Francisco?" Robert W. Baird's Colin Sebastian asked in USA Today. "I would not be surprised."

The trucking operation would likely operate in areas with already high levels of Amazon commerce, while other areas would remain in the hands of its current parcel partners. 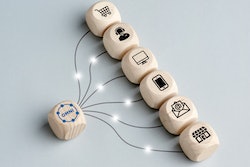 The railroad is limiting some businesses' shipments in an effort to clear up congestion.
December 16, 2022