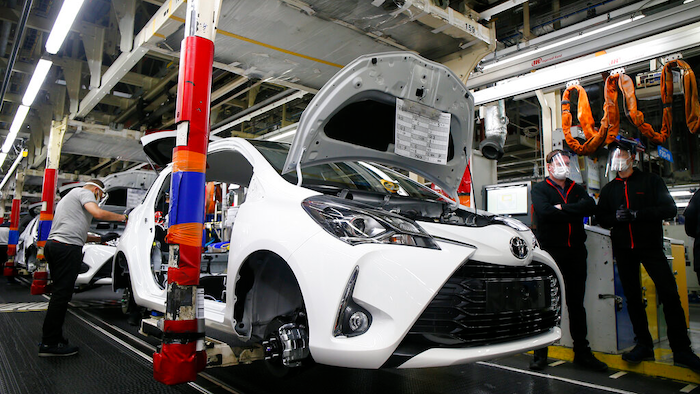 In this April 28, 2020 photo, an employee wearing a face mask works on a Yaris car at the Toyota car factory in Onnaing, northern France.
AP Photo/Michel Spingler

TOKYO (AP) — Toyota is scaling back production in North America and Japan as the surging coronavirus pandemic in Southeast Asia and elsewhere crimps supplies.

Japan’s top automaker said Thursday that it will cut back production at home by 40%, affecting 14 auto assembly plants in the country.

In North America, Toyota said it expects August production to be slashed by 60,000 to 90,000 vehicles. A representative from Toyota said that output fluctuates month to month, but that it would equate to a production cut of between 40% and 60%.

“Due to COVID-19 and unexpected events with our supply chain, Toyota is experiencing additional shortages that will affect production at most of our North American plants," the company said in a prepared statement Thursday. “While the situation remains fluid and complex, our manufacturing and supply chain teams have worked diligently to develop countermeasures to minimize the impact on production.”

The company said production cuts in North America are not expected to have an impact on staffing levels.

In Japan, production will halt completely next month at some plants and partly at others, affecting a wide range of models, including the Corolla subcompact, Prius hybrid and Land Cruiser sport utility vehicle.

Global production for September will decline by 360,000 vehicles, according to Toyota Motor Corp. But it stuck to its annual forecast to produce 9.3 million vehicles, as coronavirus risks were figured in.

Toyota had already announced smaller production cuts for July and August in Japan.

“We sincerely apologize for the inconvenience caused to our customers and suppliers due to these changes,” Toyota said.

A shortage of the computer chips used widely in vehicles has been problematic for months as the world appeared to emerge from the pandemic and demand surged. Toyota had not been hit as hard as some other major automakers, and now the spread of the delta variant has introduced new complications.

David Leggett, auto analyst at GlobalData, said auto demand is now down in Vietnam, and sales have already been hurt in some markets for all manufacturers.

“The pandemic is clearly far from over and appears, as far as the auto industry’s recovery path is concerned, to have a sting in the tail,” he said.

Toyota has held up relatively well amid the pandemic, racking up a record profit for the April-June quarter at about $8 billion, an increase of more than fivefold from the same period the previous year.